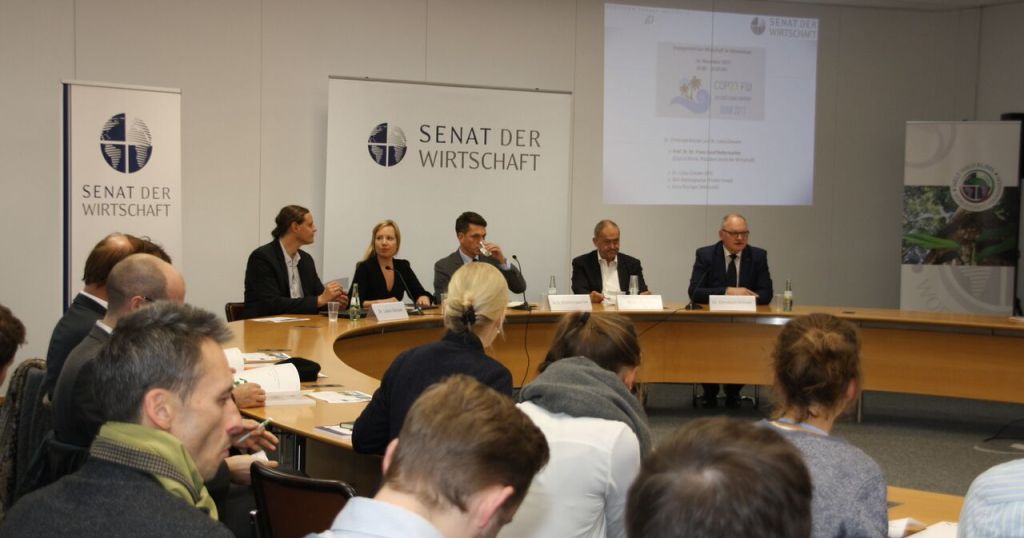 Under the magnifying glass: Private sector commitment to climate protection

On 14th November 2017, in the context of the COP23, the Senate of the Economy together with the European Forest Institute and ForestFinest held a panel discussion on the private sector’s potential to contribute to climate protection. Prof. Dr. Dr. Franz-Josef Radermacher, president of the senate, gave an inspiring key-note speech on how to combat climate change and satisfy global needs at the same time and with that triggered a lively discussion with his fellow speakers. The speakers included EFI’s own Lukas Giessen, principal scientist on International Forest Governance, Anna Rösinger – director of We Forest and Dirk Walterspacher of ForestFinest Consulting. Dr. Christoph Brüssel, from the Senate of the Economy, moderated the discussion.
As head of the research institute for applied knowledge processing (FAW/n) and as co-founder of the Global Marshall Plan Initiative, Prof. Dr. Dr. Radermacher vividly elaborated on demographic change, global development levels and their significance for climate protection. His engagement for climate protection was accompanied by his claim for the richest one percent of the global economy to take responsibility for their part in environmental degradation. He thus called for afforestation and humification of the approximately one billion hectare degraded area globally while demanding that the high emitters of this world become climate neutral. A reasonable claim, according to him, as becoming climate neutral would represent a minimal part of their income. Moreover, Radermacher emphasized that it is possible to extract 10 tons of CO2 per afforested hectare, while attending to a range of other Sustainable Development Goals (SDGs).
WeForest dedicates a great deal of their work to putting afforestation in the SDGs context. Dirk Walterspacher from ForestFinest Consulting also agreed that afforestation other than mere CO2 neutral projects, potentially serves many SDGs. Following Walterspacher, the supply chain behind afforestation creates economic value even after CO2 is neutralized and has the potential to create an industry based on sustainability.
The audience, mainly business owners, students and researchers had two main concerns in mind. Primarily, what kind of afforestation was addressed, what does it mean in terms of intensive agriculture and humification as well as how can we integrate costs of climate neutral efforts into business costs.
Radermacher explained that great volumes need to be managed, if we want a gigantic change and push afforestation and humus formation in degraded areas in the tropics as well as in semi-arid zones – reverse build deserts. Here, management would not compete with other purposes because it is mostly unused sand and over fertilization is unlikely as humus needs to be built. Anna Rösinger added that We Forest is working on Land Restoration Standards, based on the New York Declaration on Forest of 2014, to strategically guide afforestation and restoration efforts. As such legislation is still lacking, this will help with finding and selecting the right projects to invest in.
As for how to include costs for climate neutral efforts, Dr. Brüssel added important insights from yearlong experiences. Unfortunately, he stressed that private sector’s contribution to climate protection is not regulated uniformly in Germany and always context specific. However, according to Brüssel, it could always be declared as business expenses and taxed accordingly.
Concluding was to say, that the business sector, though potentially the strongest driver, cannot stand on its own. Political regulation is an indispensable force, especially in contexts of violence, uncertainty and corruption.
The event nicely demonstrated the link between the European Forest Institute and its new neighbor at Platz der Vereinten Nationen in Bonn, the Senate of the Economy. While the Institute, successfully handling the science policy interface, carefully reaches out its antenna towards the private sector, the Senate of the Economy continues to build an ecological market economy.
If you are interested in further information on private sector’s commitment to combat climate change, we recommend a recent publication of the Senate of the Economy (in German), online available here.