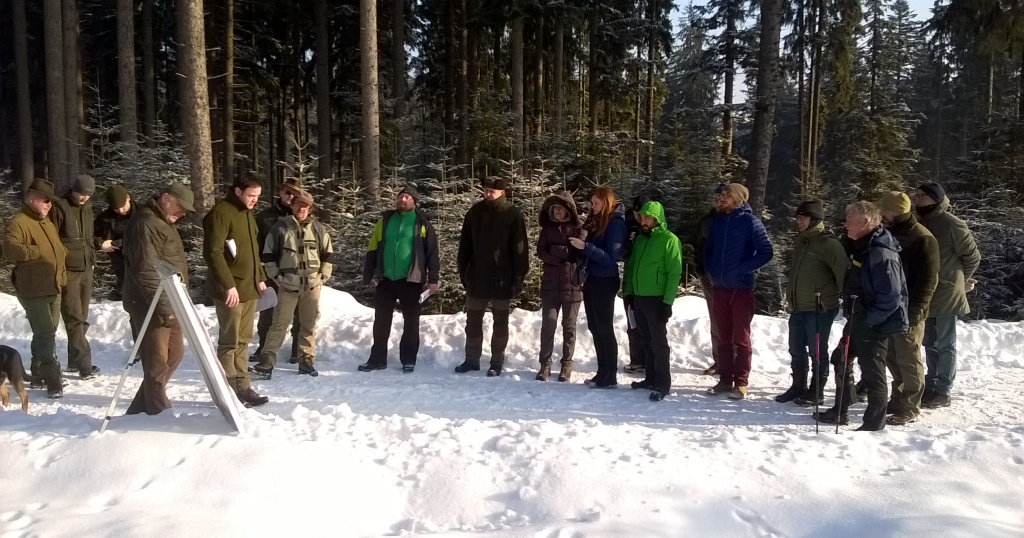 by Johanna Strieck & Laura Nikinmaa
The cold Czech winter offered a warm welcome when the participants of the kick-off event of the project “Sustaining and Enhancing the REsilience of European Forest” (SURE) started in Písek, Czech Republic, on 18th of February. More than 50 scientists, practitioners and policy makers from 19 different European countries gathered to exchange experiences with forests risks and related disturbances. Hosted by Pro Silva Bohemica and European Forest Institute, the event was the kick-off for the collaboration towards a European Forest Risk Facility.
The BS Forestry College in Písek offered an excellent location for the meeting. The morning started with welcoming words by the Director of the college Michal Grus, the representative of the host Pro Silva Bohemica Pavel Bednář and the representative of the donor of the SURE project, Thomas Haußmann from the Federal Ministry of Food and Agriculture, Germany.
Old hazards and new challenges
The following session was led by forest experts from various European locations and disciplines. Pavel Bednar and Milan Hron from Pro Silva Bohemica and Radek Porkorni from the Mendel University in Brno shared valuable information on Czech forest management – from a political, historical and a practical perspective. Subsequently practitioners, scientists and policy makers from Northern and Southern Europe presented cases and risk management strategies from their regions. One crucial fact is: European forests are constantly facing disturbances. 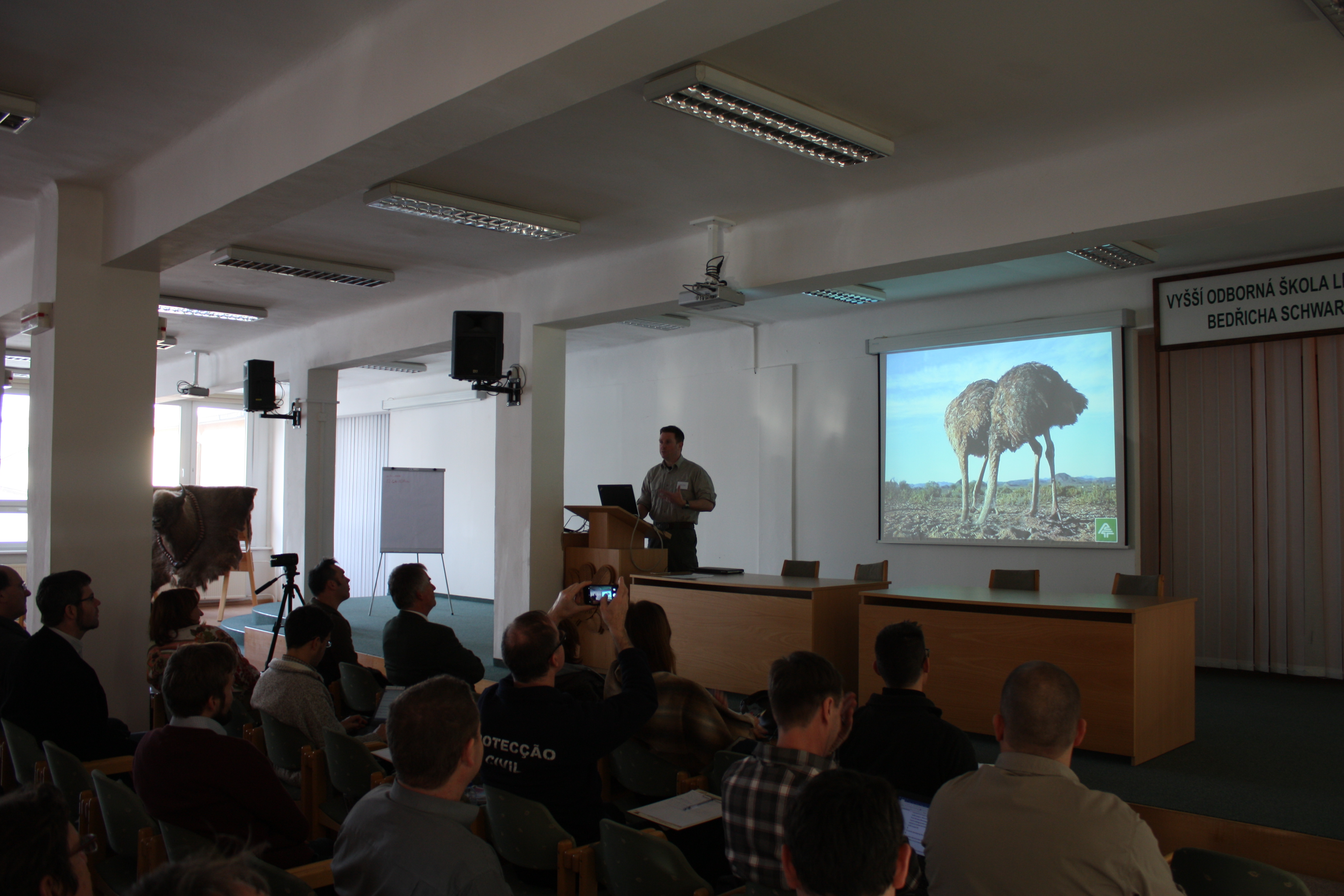 There have always been fires in the Mediterranean area, bark beetle damages in the mountains populated by conifers and storms at the Atlantic coast. However, currently different disturbances are on their way to break records and conquer new domains across the continent. Damjan Oražem from Slovenian Forest Service described the ice storm in Slovenia in 2014, which was 10 times worse than any previous recorded ice storm, leaving more than 50 % of the forest severely damaged. In the same year in Norway the exceptionally dry winter resulted in wild fires, reported Terje Hoel from the Norwegian Ministry of Agriculture and Food. Oriol Vilalta from the Pau Costa Foundation told us about the wind storm in Catalonia in 2014, which was so heavy that it left the local forest service puzzled on how to manage the affected area. After this very instructive first session, two aspects became very clear: disturbances are no longer confined to their “traditional” regions and many regions now face a multitude of disturbances at the same time. There is a need for cross-discipline and cross-border exchange of expertise, based on yearlong experiences, to be able to react appropriately when facing these hazards.
Discussing the European Forest Risk Facility
Changing disturbance regimes is one reason why a European Forest Risk Facility is needed. As more regions are affected by damages, with which they have little to no experience, the network members provide both practical and/or scientific knowhow on specific disturbances. Barry Gardiner from EFI’s Planted Forest Facility wants to see the European Forest Risk Facility as the go-to place for people to share and seek expertise and knowledge about threats and response strategies: a place for mutual learning, which crosses not only geographical but also disciplinary boarders. Ciaran Nugent from Forest Service DAFM emphasized that the cross-over between the problems is just as important as the cross-over between the countries. In turn, Christoph Hartebrodt from Forest Research Institute Baden-Württemberg introduced the project KoNeKKTiW and stressed that in disturbance-related crisis management we should broaden our focus on forest stands to also include the legal as well as the business context and management. Carlos Julio Trindade from the Portuguese City Service of Civil Protection emphasized the different cultural approaches to forests in Europe. While the management in some countries leans towards increasing the protection of the forest, in other European states the forest is perceived as a threat to safety and/or well-being, especially in countries like Portugal where wildfires have such severe consequences.
The afternoon session focused on how different projects and networks can support the European Forest Risk Facility. Many of the participants offered their organisations to act as a thematic or regional node: Oriol Vilalta introduced the European Wildfire Risk Network. Momchil Panayotov from University of Forestry, Bulgaria, and Nina Dobrinkova from IICT-BAS elaborated on the Digital Infrastructure and Resilience Institute, that would support the local communities in rural areas in the Balkans to have better access to information and tools related to risk mitigation and management. Other regional nodes were proposed by Frank Krumm from Swiss Federal Institute of Forest, Snow and Landscape Research, Eduard Mauri from EFIATLANTIC, as well as from Ciaran Nugent from DAFM and Mark Hammond from the Northern Ireland Environment Agency. In addition, the host Pro Silva Bohemica – already closely collaborating with the facility – offered to share experiences from practical foresters. 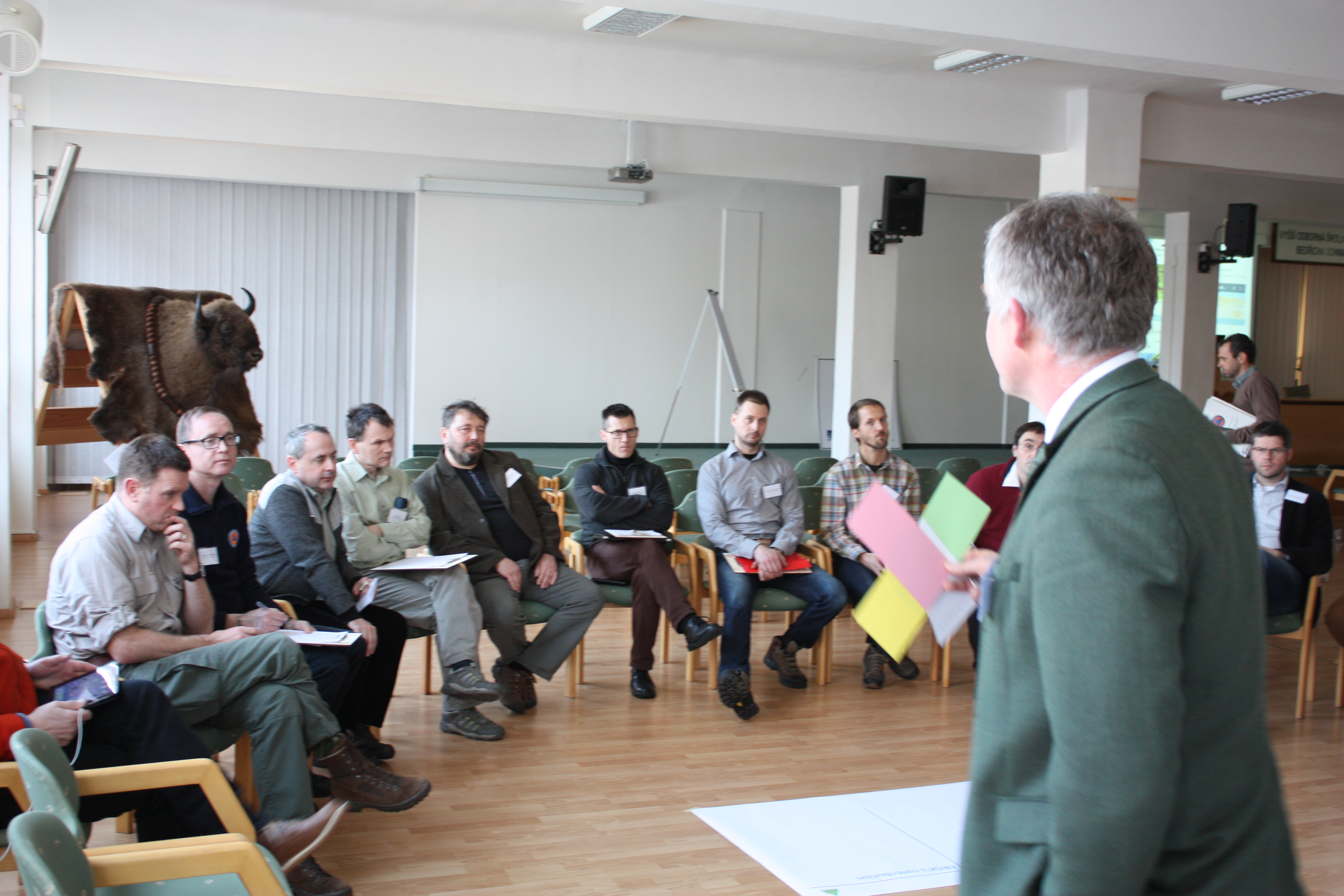 The afternoon also included a group-work session, where participants separated into two groups to develop the overall strategy of the Risk Facility and discussed required contributions from the regional nodes. Amongst others, the most important outcomes were that trust and communication between the nodes is key and also prerequisite for success. Following the participants, a multilingual database, a toolkit for resilience enhancement, communications training and more should be provided by the Risk Facility.
Czech forest: lively discussions and cold feet
After the first day, a change of location to the Army Forest Estate Horní Planá – Boletice in Olsina took place.  Jiri Novák introduced a project on minimization of wind and snow damage in Czech forests. 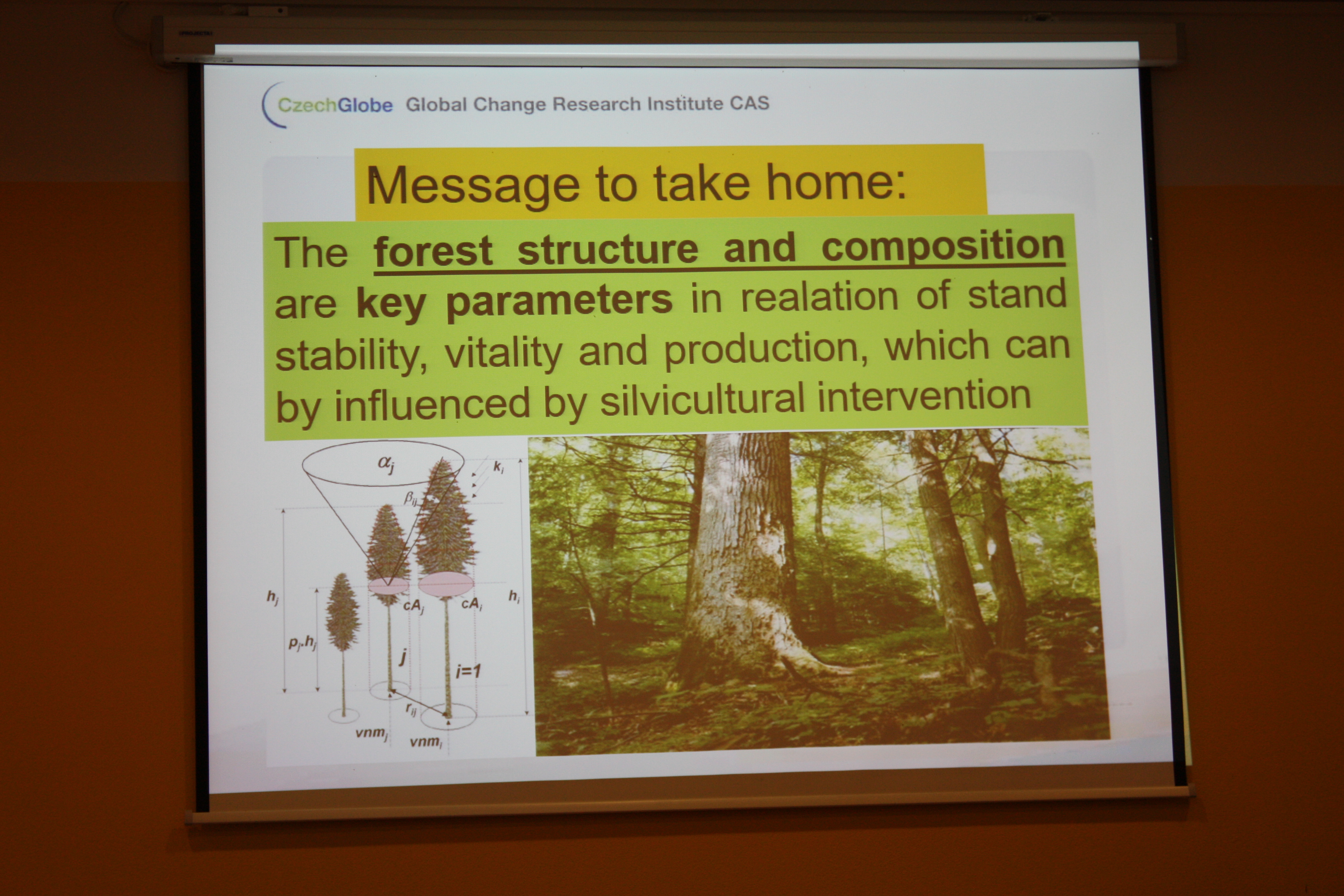 Antonín Martiník, offered valuable insights into forest stands after disturbance and measures we can apply while Pavel Rotter gave a very instructive presentation on forest soil endanger. Jan Krejza elaborated on Norway spruce stands’ mechanical stability and carbon sequestration and insights into their research of the Global Change Research Institute in Brno.
Day two was all about the Czech forest: the 50 participants had the chance to visit the forest managed under the Horni Plana Division, the Boletice Military Training area, half of which is part of the Sumava Protected Landscape Area (CHKO), under the informative guidance of Jan Kozel. The excursion stopovers were threefold. The first one provided the group with insights into forest stands disturbances. The area was affected with huge wind breakage caused by Kyrill in 2007, and subsequently bark beetle damage. Finally, it was hit by cyclone Herwart in 2017. 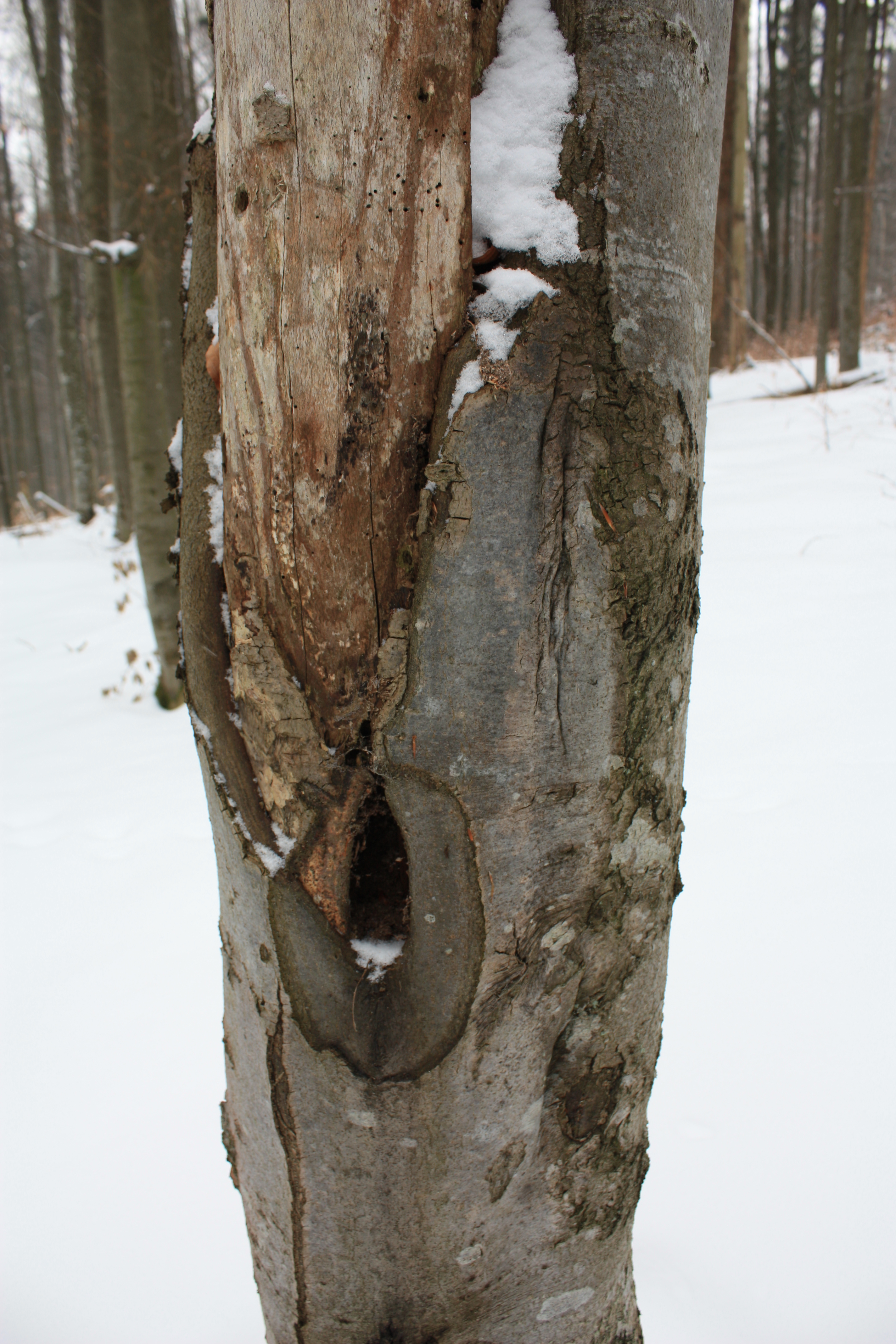 The second stop was an exemplification of a special-purpose forest management close to the Blanice river, which was declared Blanice River National Nature Monument (NPP) in 1989. The whole territory of the Arnostov Forest Administration is incorporated into the protection zone. It has a significant impact on the whole forest management and materials used, for example for the bridges. The third stop gave the group the chance to observe the regeneration of a mixed forest stand with the target to achieve a mixture extending to the next generation. We were able to observe first-hand and get direct information on wind storms effects and risks in Norway spruce stands in the Army Forest Estate and the forest re-establishment – “traditional” and biological approaches; close-to-nature forestry as prevention to avoid huge disturbances caused by both biotic and abiotic factors. Participants asked questions directly related to Czech forest management and exchanged different viewpoints and experiences on the spot. 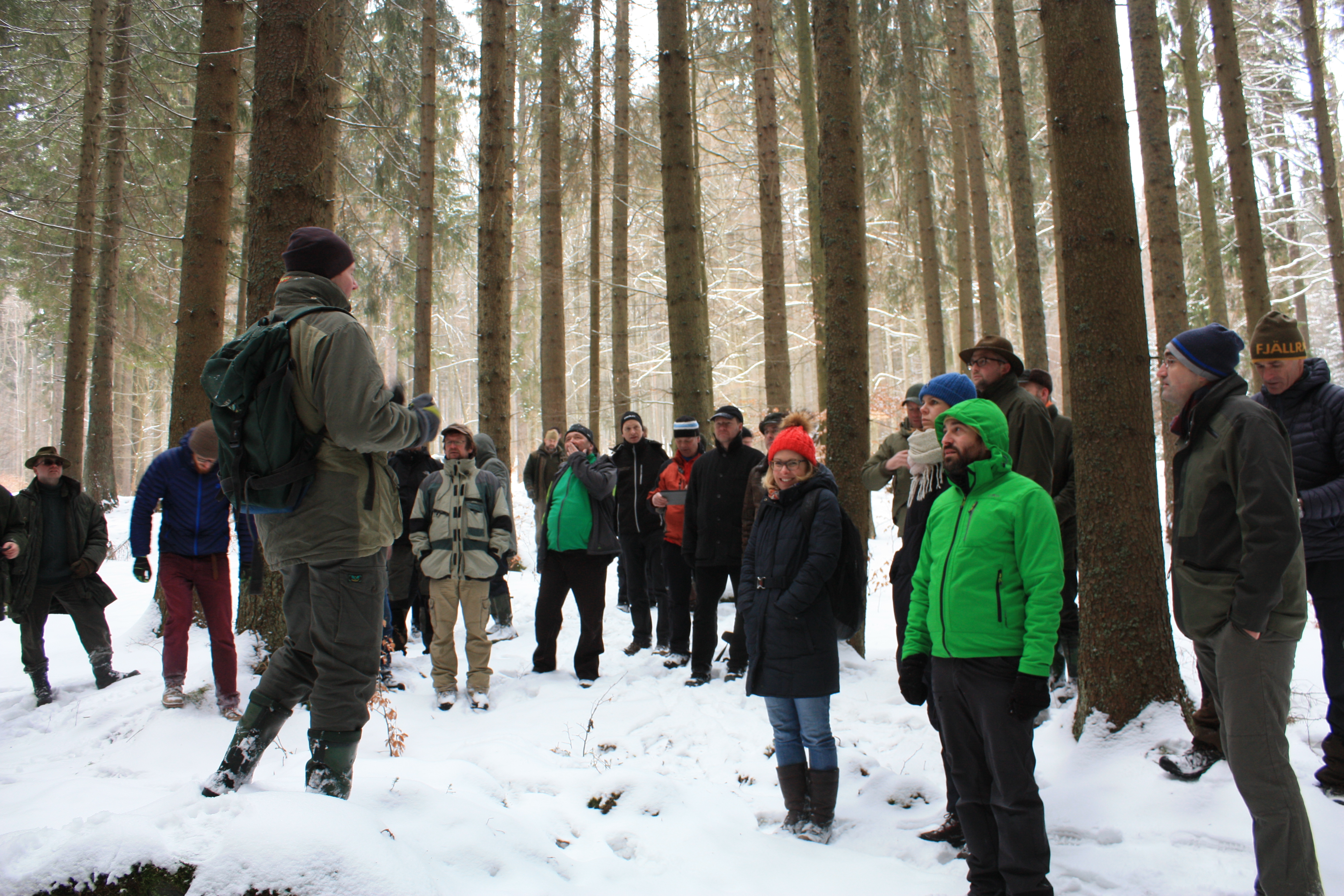 Similarities and differences in management strategies became clear quite quickly and led to a lively discussion in the natural reserve on a sunny day, ankle deep in powder snow.
Municipality-managed forest
A great finish of the kick-off was provided during the third day, which started with minus 7 degree and bright sunshine, visiting the forest enterprise of the Volary municipality. The 3300 ha of forest are surrounding the town as can be seen from the aerial picture. The town of Volary, after the political change in 1990, formed a 100% municipality owned company to manage the forest. The group of participants was welcomed by the director of the enterprise Miroslav Řežábek and two foresters Jiří Škrna – deputy of director and executive officer and Vlastislav Klimt. The excursion took us through three stations where we learned about and discussed the forest management concept applied in Volary. The group was able to observe the conversion from a shelter-wood system to a system close to free style silviculture in impressive silver fir and spruce stands. Even silver-fir is regenerating without protection there – which is not very often the case. The wildlife management situation in Volary is obviously heavily influenced by the neighboring Sumava National Park, however, the applied hunting system does provide very good regeneration in Volary. 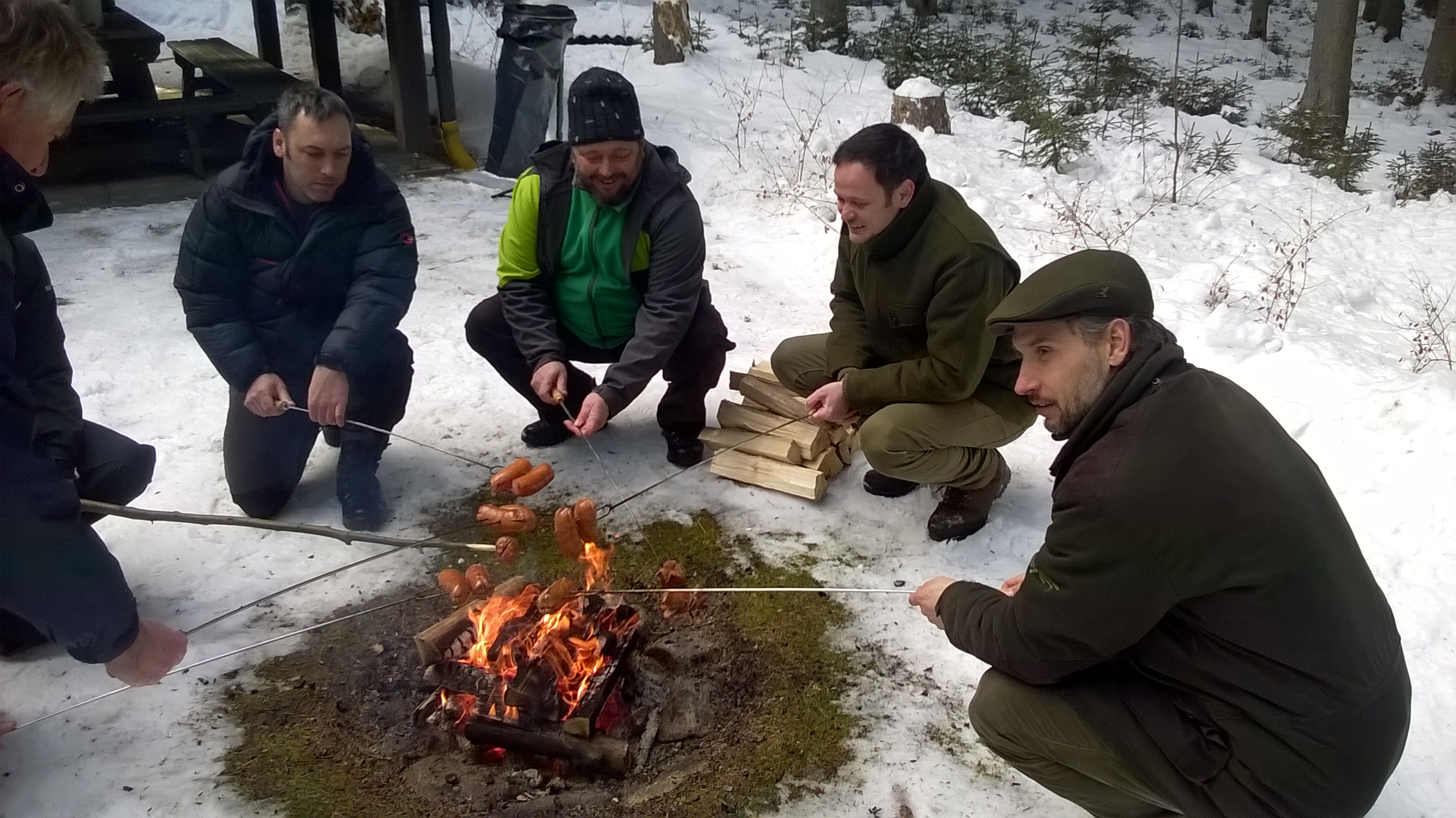 Following the participants, this mixed, structured and uneven-aged forestry system was a true highlight of excursion. The morning ended with great hospitality around the fire and in a hunting lodge. Food, tea, locally brewed beer and medicine was served, which fueled a lively final discussion.