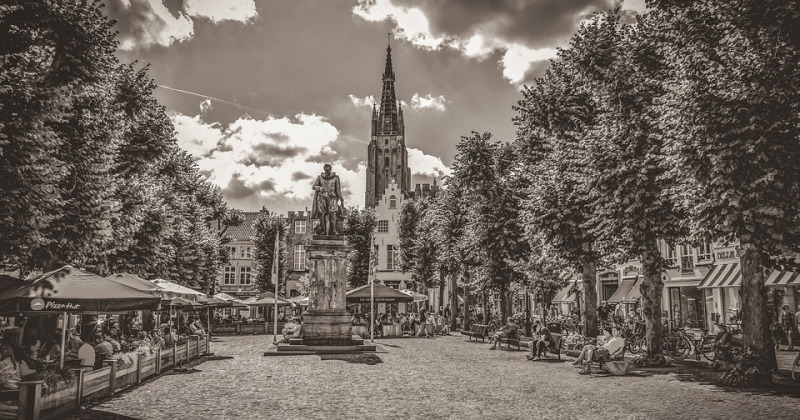 For example, a planner sees the tree as an element in his or her design, with precise specifications (soil requirements, height, species and variety) and an exact location, while the Parks department considers the tree as an additional element to be managed. The project developer would prefer not having the trees where he/she want to build houses, but wants lots of trees around the development as this increases the real estate value.
Let us discuss two recent articles in Belgian newspapers on street tree conflicts. In the first article, the heading is “Those trees are terrorising us” (9 May 2018). The inhabitants are asking the municipality to remove the beeches in their street as quickly as possible, because the trees block the sunlight, damage the road, the pavements and the driveways. Roots are damaging drainage systems, and the blossoms block the drainpipes. The residents ask questions regarding the use of beech, “this beeches belong in the forest, not in our neighbourhood”.
In the other article – Fuss about six poplars: “These are monuments, you don’t touch” (10 August 2017) – residents react against the cutting of six poplar trees in an urban re-landscaping project. They explain that the poplar trees belong to their village, and that they are part of the local identity and heritage. According to the city’s green department, the trees have to be removed because the poplars are blocking the sight, the trees are not in line with the new plan, and the poplar trees are dangerous (due to their age they are prone to wind damage).
Both stories highlight diverging social representations of the trees in the residents’ neighbourhoods. The first story focuses on the negative impacts of the trees on the residents, the infrastructure and the properties. The residents stress the need to control and regulate the trees, and to remove them. This social representation is quite diverging from how green-space managers and planners see trees: the negative impacts (ecosystem disservices) and lack of human intervention are stressed by the residents, while urban tree-adepts focus on the multiple benefits and ecosystem services that urban trees provide. Remarkably, the ecosystem services of providing shadow (which is stressed as a benefit of trees because it improves indoor climate) are seen as negative by the residents (the shade has a negative impact on solar panel production).
The second story focuses on the positive aspects of the trees, but mainly because of the aesthetic and cultural importance of the trees. They do not mention other positive impacts (including ecosystem services).
The insight in the social representations provides handles to find win-win situations. In the first case, the residents indicate that they could live with smaller trees, that have less impact and do less damage to the grey infrastructure. This can be the start to find a solution, in the form of trees that are more adapted to the location.
The second case, which is a more “tree-friendly” reaction at first sight, is less easy to solve. The residents are focusing on saving the poplar trees, which is very much in contrast with the actual plans. Smaller and younger trees do not have the look and appearance of the old poplar trees they have to replace. As the appearance of the trees is so important to the inhabitants, this aspect is something that has to be taken into account when looking for a solution.
Finally, one can notice that ecosystem services like air pollution, climate mitigation, carbon sequestration, tempering wind speeds, temperatures and flood are not mentioned by the residents. However, these ecosystem services are at the core of the pro-tree discourse by decision-makers, planners and green-space managers. One can ask the question, can we – as urban foresters – really win the minds and hearts of urban dwellers when stressing the ecosystem service forests and trees provide? Which place do ecosystem services – mentioned implicitly or explicitly – have in stakeholders’ social representations of nature and their neighbourhood?
This article is based on a speech and PPP, presented at the World Forum on Urban Forestry, Mantova (Italy, 28 November 2018): Social representations of nature: Can they contribute to understanding citizens’ relation with urban trees?