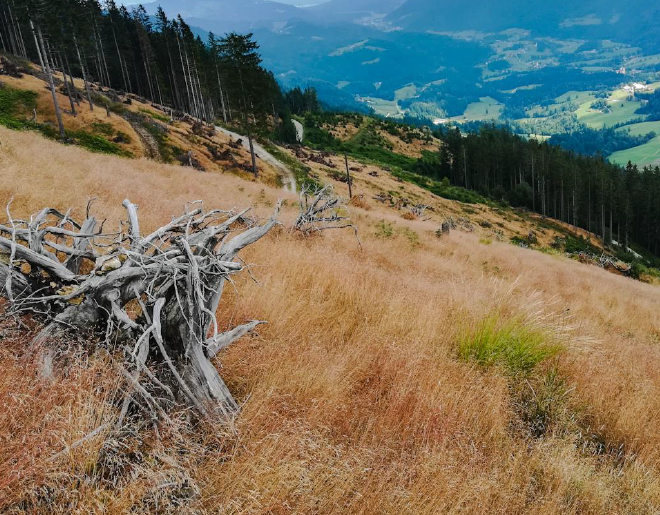 In the Logatec case study, an ice storm in 2014 severely damaged the mixed forest with gradients of spruce from below 20% to spruce monocultures. The storm was followed subsequently by bark beetle attack, which led to salvage logging. Goal of the study was to investigate how different shares of spruce in the stand affected the post-disturbance recovery process. In their sampling efforts, the research group recorded data on regeneration density per species and size class. The scientists also looked at recovery drivers such as site factors and competition by other vegetation, tree stumps to reconstruct the species composition before the disturbance, and cored trees which survived the disturbances. Based on this data they calculated the compositional (diversity of tree species) and structural

heterogeneity (diversity of tree sizes), as well as growth resilience[1] (an indicator measuring how large the radial increments of the trees are now compared to before the disturbances). Preliminary results of the study show that regeneration is mainly composed by small sycamore maple individuals, and some beech trees. The overall density decreases with greater disturbances severity and more pre-disturbance presence of spruce. Structural diversity of the regenerating stands tends to be similar after low to intermediate severities, whereas it is consistently lower after high-severity disturbances.

When looking at post-windthrow (2008) recovery in Slovenian sites, the group of researchers investigated three different sites in various parts of the country: a montane beech-fir forest, a sub-montane beech forest with broadleaves, and a pure spruce forest. The latter used to be a mixed forest before, but the species composition was altered in the past (making it a pure spruce forest), by planting spruce in a habitat where it would be present anyway, but in lower proportions. Three inventories were carried out 4, 6, and 11 years after the disturbance, with a similar protocol to the case study in Logatec: looking at the density per species and size class, height of dominant regeneration, and drivers as site factors, browsing occurrence, herbs, and shrubs competition.

The scientists decided to put a specific focus on exploring the different outputs of plots left to natural regeneration vs planted ones. They also aimed at understanding how regeneration densities and recovery drivers change over time. Preliminary results of the study show that average regeneration densities tend to converge after 11 years, across sites and treatments. Nonetheless, higher variability is present in areas left to natural regeneration after salvage logging, compared to planted ones, which had a higher share of plots with densities above Slovenian density targets for restoration. In the majority of cases the composition of regeneration tended to be made of more pioneer and light-demanding species than that of the pre-disturbance stand. Presence of spruce was only partially maintained, and spruce share declined especially without planting operations. Consequently, it can be concluded that planting after a disturbance is still recommended for private forests at high elevations where regeneration tended to be scarcer and suffer the competition by herbs. The Slovenian studies were conducted by Matteo Cerioni, Gal Fidej, Jurij Diaci, Matija Klopcic, and Thomas Andrew Nagel from University of Ljubljana in the framework of the project I-Maestro

Featured image by Gal Fidej, researcher at University of Ljubljana