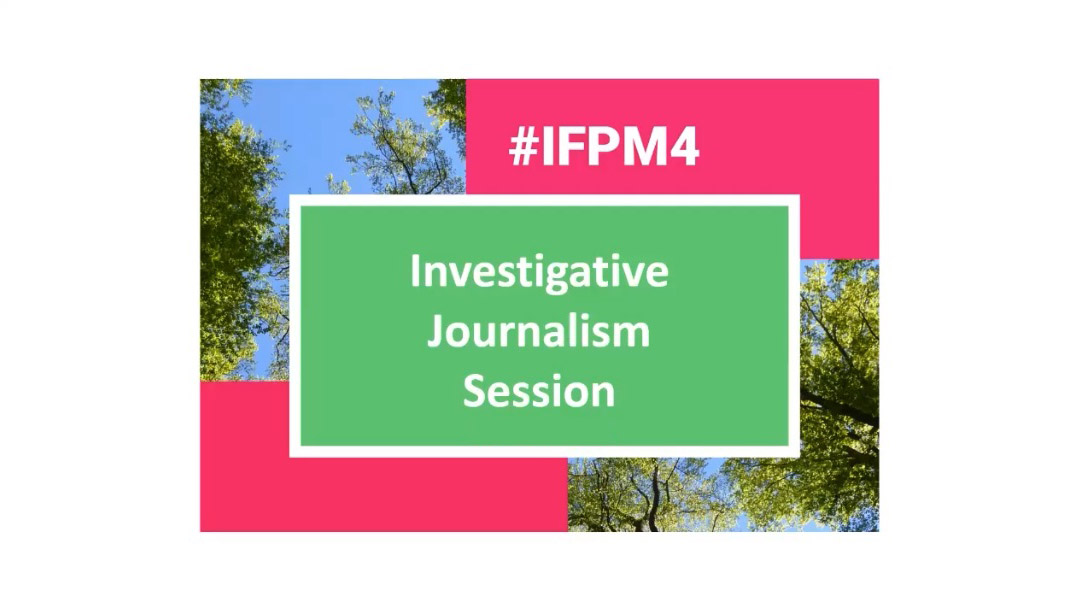 Exploring the world of investigative journalism: Some takeaways from the panel session at the International Forest Policy Meeting (#IFPM4)

From wildfires to deforestation in the tropics, journalism brings various forest-related issues to the public attention. Yet, one of the main concerns from the scientific communities is the issue of ‘speed over accuracy’, where many news journalists fail to report complex topics without providing contextual background. Particularly in the digital age, when the speed of news is faster than ever before, there is even more pressure on today’s news industry to report forest-related issues in a timely and accurate manner.

The good news is that there is a wide variety of journalism practices that take serious consideration of the process for inquiry. In particular, investigative journalists take a unique approach to exploring the issues in depth before jumping to a quick conclusion. Many investigative journalists spend years following a single issue by working closely with scientific experts and mastering the skills to wrangle complex (and often unstructured) data to identify the links that no one has ever addressed in the news.

So, how do digital age investigative journalists start their inquiries, gather scientific information and data, work with sources and bring their stories to the public?

At the recent International Forest Policy Meeting (#IFPM4), we were lucky to be joined by two leading investigative journalists, Alexandra Heal, a reporter for The Financial Times, and Madeleine Ngeunga, an editor of InfoCongo, to share their experiences in reporting deforestation issues in the Amazon and the Congo Basin. They have worked closely with scientific communities for many years and have utilised different digital tools to inquire about missing pieces of information.

Formerly with the Bureau of Investigative Journalism, Alexandra introduced some of the stories on the global supply chain and links with the Amazon, including a piece on the global beef trade and the UK’s involvement, one of the largest global meat producers JBS’s failure to meet its own “zero tolerance” commitment to illegal deforestation, and the destructive soya export to feed chicken in the UK. The team also interviewed “those in power”, ranging from British ministers to MEPs. Partnering with other media like The Guardian and Reporter Brazil, the team successfully brought these issues to broader public attention, something that is difficult to do as a small journalism agency.

The first story on beef was not only the outcome of a six-month-long investigation. It also made the team realise that deforestation deserves deeper investigation. “We felt like we were putting ‘beef trade’ on the agenda by doing a story”, said Alexandra. For the team, it was crucial to take a case study approach to “provide the colour” so that their stories become interesting for the audience to read further, backed by scientific data to suggest a similar situation is happening at a much broader scale.

While looking up relevant data online, the team came across Trase, a supply chain transparency tool developed by Stockholm Environmental Institute and Global Canopy. As they reached out asking for the beef data, the experts gave exclusive access so that the Bureau’s team could work on the first big story on the global beef trade. That ignited them to work closely side by side for the next three years.

As one of the current Pulitzer Center’s Rainforest Investigations fellows, Madeleine has reported on political, social and environmental issues driving deforestation in the Congo Basin. Madeleine introduced one of the most recent investigations where approximately 2,000 hectares, including indigenous land, were cleared by agro-industry for palm oil plantation in Cameroon. With her knowledge of forest governance-related issues, she has taken a unique approach to assess a wide range of information and data from different entities, including scientific sources.

For the year-long investigation, Madeleine first looked into the existing NGOs and media documents to get a contextual background. “We don’t just focus on field reporting and interviews. Instead, we combine different tools to have more accurate information, including geolocation data and the Global Forest Watch’s RADD alerts“, said Madeleine. The team then compared these data with the official documents and corroborated with the local civil society organisations to see whether the field knowledge corresponds to the scientific data and vice versa.

However, Madeleine points out some of the challenges experienced by the journalists, including not only the access but also scientific insights to interpret the data and scientific review accurately. “It’s difficult for journalists to understand scientific data, so more collaboration between scientists and investigative journalists can result in more in-depth reporting on forest issues.”, she said.

Following short interventions by both journalists, we followed up with a few questions:

How do investigative journalists decide which organisations, sources and tools to work with?

“From my experience, you usually google what you are looking for. I was looking for data on deforestation driven by the beef industry and came across Trase”, said Alexandra. Yet, a background check is important for journalists to ensure that the sources are trustworthy and reputable. Going through past publications and asking existing contacts of researchers to verify the reliability of the organisations are some of the techniques Alexandra applies in the process. Once the working relationship is established, you continue exchanging information and updates on a regular basis, leading to further investigations.

How can scientific communities best collaborate with investigative journalists?

One of the challenges with working in a remote area is that scientific meetings do not often take place close by, making it difficult for journalists to meet scientists. “We can improve that by having a platform to discuss, get the information and data from the scientists, and build connections with these organisations”, said Madeleine. So what about when scientists have interesting research for investigative journalists? Alexandra pointed out, “Find the journalists working in your research field and email them to see if they are open for collaboration. But don’t send a press release. We get so many and just ignore them.” Sending a personal email is a much more effective way, said Alexandra.

Have you experienced any kind of threats or uncomfortable situations during your investigation?

“We do have pressure when investigating companies. I usually have a backup team, including lawyers, to support me when the companies try to intimidate me.” But pressuring them by publishing stories is an important part of an investigation, said Madeleine. While Alexandra’s team did not experience any threats, their partner in Brazil has experienced office break-ins and other direct threats. “I think that was one of the reasons why they were keen to collaborate with us and The Guardian for any legal backlash”, said Alexandra.

How should we ensure substantial resources to support investigative journalism?

Many changes have happened in the journalism industry over the past 10 to 15 years due to the rise of the internet. As a consequence, it has become difficult to carry out investigative journalism due to budget cuts. However, new organisations like the Bureau are emerging, and more philanthropic funding is now directed toward these initiatives, as Alexandra pointed out.

Addressing the resource challenges is possibly where science and investigative journalism can meet so that these investigative journalism efforts can continue to bring important forest-related issues to a wider public. However, collaboration between scientists and journalists is only successful when scientists respect journalistic independence and impartiality, and journalists spend enough time to understand and translate scientific findings in an accurate manner.

Watch the recording of the session: