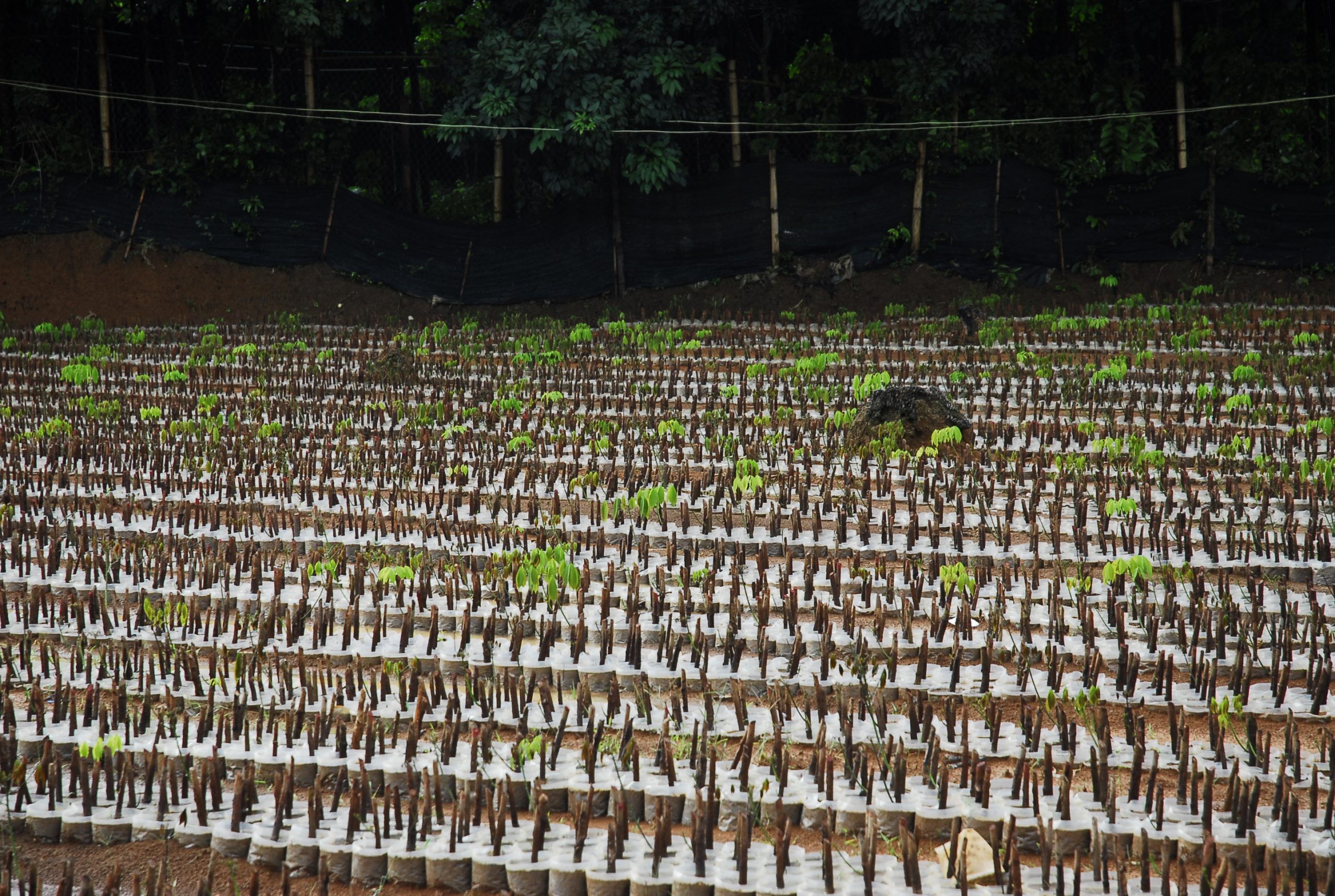 While many people might know that cocoa or coffee are tropical products mainly produced by smallholders, only very few will know anything about natural rubber, despite it is an industrial raw material being used in a high number of products (such as truck tires, mattresses, or surgical gloves). But these products are hardly associated with agriculture. Therefore, the discussion on deforestation didn’t play a dominant role in the rubber sector in the past.

When we refer to “deforestation-free” production it is important to be aware of the time factor. The agricultural evolution from hunter-gatherer to farmer took mainly place at the expense of forests. Therefore, the so-called ‘cut-off’ date has been introduced to define the date after which the removal of forests for the production of a commodity is formally classified as ‘deforestation’. All other production taking place on land that has been deforested before the cut-off date is classified as deforestation-free.

Natural rubber (NR) is a somewhat ambivalent ‘commodity’ since it is mainly produced in tree monocultures and rather resembles forest plantations than the typical agricultural crop. But the fact that its major task is to produce rubber instead of timber makes it an agricultural product.

Currently, the pressure on forests due to NR-expansion is not very pronounced because NR-prices are low. But market forecasts predict a growth beyond 4% for the years to come. Naturally, this requires either an extension of area with a high risk of deforestation or an increase of productivity. For sure, the latter should be aspired. This requires an improvement of skills combined with powerful planting material and an adapted management. These are the challenges ahead of the NR industry.

How does international forest governance influence the sustainability of supply chains? What do governments do already – and where can they improve?

In my opinion a single sector can hardly handle the complexity of the challenges. Thus, agricultural expansion is inextricably connected to forest governance since forests are usually repositories for agricultural land. Therefore, it is crucial that the different sectors cooperate, and both develop and implement a common land-use planning which safeguards sustainability.

Do we have international standards? Are they sufficient?

We don’t have a specific ‘standard’ for the ‘sustainable’ production of natural rubber, but approaches addressing different aspects. But there is definitely a lack of common understanding concerning the meaning of ‘sustainable rubber’.

Coming back to the crucial collaboration between different sectors, where does this leave us as consumers? How can we as consumers make a change?

First of all, we need to be aware that we are ‘consumers’. Our use of resources has considerable impacts far away from us. Therefore, a conscious and critical consumption of resources is essential. That doesn’t necessarily mean asceticism but requires the awareness that resources are more than just a price tag. A conscious consumption comprises asking questions (to the seller, producer) as ‘where does the product come from’ and ‘how is it produced’? We also need to ask ourselves: Does this product fulfill my ethical values concerning human rights, child labor, salaries, and so on? When sufficient consumers ask such questions, providers will react. For sure, this doesn’t replace the necessary setting of legal framework conditions, but it is an important step.

What are the issues people are facing on the ground in the producer countries – and what are the challenges to address when looking at international supply chains?

For smallholder farmers safeguarding their livelihood is the priority. There is a complex of low prices, competition with other commodities (e.g. oil palm versus rubber), land scarcity, lack of ownership rights, rural-urban migration and thus lack of work force. Beyond the complexity of production, the supply chain and the respective price policies are usually little transparent.

How do rubber farmers and manufacturer companies agree on a deforestation-free supply chain?

Usually, rubber manufacturers cannot trace back their commodities to the farm level but rather to the local factory where the raw rubber (technically specified rubber, sheets) is produced. The supply chain between rubber factory and farm is often quite complicated and involves different degrees of middlemen. There is a trend towards increasing transparency by reducing the number of middlemen, documenting the delivering farmers and measuring their farms via polygons. Therefore, the ‘discussion’ on deforestation-free production will require the consideration of the – often missing – links between factory and smallholder producer.

What kind of incentives are there for the rubber smallholders to work in a sustainable way?

This is an ambivalent question since it assumes that there is a common understanding of sustainability. But what people from the “rich North” define as sustainable or sustainability might not be of any direct relevance to smallholders. As emphasized above already: The very first objective of smallholders is safeguarding their livelihood. As long as daily needs for food, health care, nourishing children, etc. are not secured, ethical questions about biodiversity or climate change or any other priority of the “rich North” are secondary or tertiary to smallholder farmers.

Why do manufacturers decide to use materials from fair trade/sustainable sources?

In my opinion it is again necessary to differentiate. Generally, there is the pressure of NGOs and a reputational risk for manufacturers. Additionally, international legislation will play an increasing role. I still remember the Gibson-Case ten years ago: Gibson Guitar settles probe into illegal wood imports | Reuters, when the famous company Gibson Guitar was forced to pay a $300,000 penalty under a criminal enforcement agreement with federal prosecutors in the US, after it admitted to possible illegal purchases of ebony from Madagascar. Future international legislation might further aggravate the situation for manufacturers. And finally, there might still be another incentive, especially for owner-managed companies, and that’s ethics. This aspect might probably not so much be pronounced in stock market companies …

Why should companies choose a deforestation-free production?

Ideally, they would do that due to ethical reasons. But to stay realistic, the current developments in legislation towards deforestation-free-supply-chains will make it necessary that companies understand their supply chains and assure that their products won’t be associated with deforestation.

Would using materials from fair trade increase the price of products?

The increase of production standards requires additional inputs. This refers to the upstream level/on the field through improved agricultural practices (e.g. the application of good agricultural practices, integrated pest management, etc.), or along the supply chain through safeguarding traceability. If this isn’t reflected in higher prices someone else has to cover the costs, probably the farmers. But if that’s the case, farmers might even turn away from ‘sustainable production’.

Since rubber plantations are mostly under agricultural legislation it requires an intersectoral or holistic approach covering a common land-planning, priority setting, identification of HCV/HCS-areas. For instance High Conservation Value (HCV) and High Carbon Stock (HCS) approaches to land-use planning are used to identify and protect important environmental and social values that need to be conserved. For more info check out this short explanatory video: HCV and HCS for Consumer Goods Companies. The new legal initiatives towards deforestation-free supply chains will definitely be a game changer since companies will be forced to analyze their supply chains.

How relevant is the improvement of livelihoods of the smallholder farmers and communities for the international forest governance?

This is again an interesting and ambivalent question. Sometimes it is argued that low incomes result in plantation expansion and thus the loss of forest since farmers simply need more land to survive. On the other hand, one could observe a tremendous expansion of rubber plantation area during the high price period at the beginning of the millennium. While currently, under a low-price regime, farmers rather look for off-farm income options or shift to other, more profitable crops rather than to continue with rubber tapping.

In the beginning of this interview, you have mentioned the extension of NR-plantations between 2001 and 2015, which has been associated with a deforestation of 2.1 Mio hectares. Despite your observations of the current situation, when farmers turn to more profitable crops: How is the expansion of rubber plantations affecting natural forests?

We have to distinguish between the establishment of new rubber plantations on agricultural land, ‘degraded land’ or at the expense of natural forest.  As any other deforestation the expansion of NR-plantations into intact forests leads to biodiversity loss, erosion (at least during some periods of the plantation life cycle and depending on the management), drop in CO2 storage. In case natural rubber replaces annual crops, it can be even environmentally beneficial since there will be a tree cover and soil protection for nearly 30 years. Additionally, the rubber timber can be used and provide additional income at the end of the rubber life cycle. Thus, it can contribute to a reduction of pressure on natural forests. The establishment of plantations on so-called degraded land is ambivalent since such areas are often covered by a diverse coverage of secondary vegetation (succession) which might be of considerable ecological value. The same is true for secondary forest. Anyway, the terms degraded land and secondary growth might often be used synonymously.

Finally, let’s talk about some good practice examples: Could you name any success cases of alternatives to conventional cultivation?

Organic farming seems to me one option where markets are willing to pay the additional costs of production, but this is usually only true for consumables with an ‘emotional value’ as cocoa, coffee, nuts, etc. This is hardly the case for NR, which is a ‘hidden commodity champion’, but not really ‘sexy’ when it comes to marketing. I only know Einhorn condoms which managed to attract considerable attention with a smart and cheeky advertising. They initiated the Regenerative Rubber Initiative, which follows a holistic approach towards sustainability ( Home | Regenerative Rubber Initiative (regenerativerubber.org) ). Nevertheless, they only represent a tiny fraction of international rubber trade.

Another interesting approach is the ‘responsibly sourced rubber’ initiative implemented in Westkalimantan by Continental and GIZ Sourcing Natural Rubber – sustainably and responsibly | Continental tires (continental-tires.com). But there are many other initiatives and companies, respectively, addressing sustainability aspects at different levels.