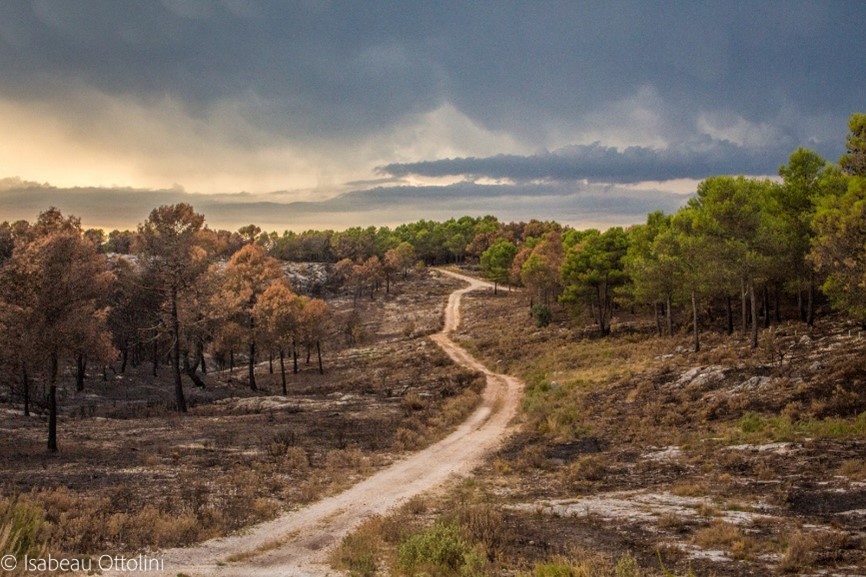 Communicating during an extreme wildfire: a first-hand experience

Isabeau Ottolini is an Early-Stage Researcher within the European ITN project PyroLife, and visiting scholar at EFI Bonn. She researches community-based wildfire communication, specifically through a case study in Spain with the local association Pego Viu.

Most communication around wildfires happens in the prevention and preparedness phase. That is, before a potential wildfire happens with the aim to reduce wildfire risk. However, sometimes the need emerges to communicate during a wildfire, and that’s a whole different game.

In this blogpost, I share the story of the Vall d’Ebo (Spain) wildfire that happened this August, and what the local association Pego Viu and I learnt from communicating during this extreme wildfire.

A bit of background

It is not the first time the people from Pego i Les Valls (a region in the Alicante province, Spain) experience a wildfire. In 2015, a wildfire affected around 2.000 hectares of forests. From the ashes of that fire, the citizen association Pego Viu was born. This local group carries out many different activities in the area. For instance, post-wildfire actions like replanting with autochthonous plants, or stabilising terraces on the slopes to counter erosion. Or wildfire prevention activities such as awareness campaigns and fuel management. Moreover, they contribute to strengthening people’s relationship with their territory through activities like workshops on edible and medicinal herbs or recovering material and immaterial heritage linked to traditional land uses (mostly farming and grazing). Since the 2015 wildfire, the local ecosystem made a remarkable recovery: dense shrubs and young pines once again covered the slopes and valleys burnt just seven years before. More than once, people would say ‘this landscape is ready to burn again’. And, it turns out, so it did.

Communication during a wildfire

On the 14th of August, a wildfire started in the rugged and inaccessible mountains of Pego i Les Valls and became one of the biggest wildfires in a decade. Several villages were evacuated, and it took several weeks for the fire – which affected 12.000 hectares – to be fully extinguished. It was, in short, an extreme wildfire that deeply impacted local society.

During wildfires, communication is often focused on two very different audiences: the general public and the people experiencing the wildfire. The first happens through broad media channels like television and radio, telling a generic story to the rest of the world, unaffected by the wildfire. At times, this is the only communication happening during a wildfire. And while it might sufficiently inform the general public, the people actually experiencing the wildfire have an urgent need for accurate and real-time wildfire information.

During the Vall d’Ebo wildfire, Pego Viu and I clearly noticed this need for information that allows answering questions like: where is the wildfire now? What assets – like homes and livelihoods – are threatened by the fire, and how can these best be protected? Do we need to evacuate? For instance, Pego Viu has diverse volunteer WhatsApp groups, and many of the members are also firefighters, forestry technicians, local council members, etc. Together they form a critical mass of people who provided accurate and reliable information during the wildfire. This was then further disseminated (e.g., through WhatsApp and social media channels) to keep local people as informed as possible.

A first lesson to share is this: during a disaster, prioritise creating accurate and timely messages that are directly relevant for people affected by the wildfire. Closing that information gap can mean so much to people. Sometimes it can literally save lives, and it helps to reduce the emotional impact of the wildfire. People can feel more included and considered in such challenging circumstances if they have relevant and targeted information on the wildfire.

We also saw that wildfires were on everybody’s mind during those days. People expressed an increased interest in more in-depth wildfire information and reflections. Taking this window of opportunity, we made content both for Pego Viu’s social media and gave interviews to radio, magazines and television. We covered topics such as fire ecology; ideas on how we (as individuals and part of society) can prevent future wildfires; debunking wildfire myths and misinformation; and tips on how to emotionally cope with disaster.

So, another lesson is this: during a wildfire, there is both a need for urgent, accurate information about the wildfire itself, but also information allowing people to develop a more in-depth understanding of wildfires in general. For those living in a wildfire-prone territory, this is especially important, as we’ll likely experience other wildfires up close, and want to prevent future disasters.

Communication after a wildfire

Once the flames were (mostly) extinguished, and people could return home, questions appeared such as: What are the next steps? What should we do now? How can we prevent a disaster like this one from happening again?

In response to this, Pego Viu initiated a broad variety of activities (many still ongoing). These take form mostly through very interactive, two-way communication. For instance, organising public meetings to gather ideas on the next steps in wildfire recovery and prevention; asking kids to draw, paint, and craft about their wildfire experience; meeting other groups and associations in the area to create partnerships and collaborations; and setting up a weekly radio program to talk about wildfires and broader environmental topics.

We learned that after a wildfire it is key to create spaces for reflection and expression to process what has happened, and to gather forces to recover from the wildfire as well as prevent future disasters from happening. This requires interactive, long-term engagement with the local population. As a community-based initiative, Pego Viu is well up to this task.

Communicating during a wildfire is not easy. To inform people, you continuously have to balance getting out information as quickly as possible, while also ensuring this is as accurate as possible. Doing so, while also being a local inhabitant in the wildfire-affected area makes it extra challenging. For instance, because you personally know many of the people impacted, and because treasured forests and valleys suddenly are transformed by the fire.

Even so, from this experience, we have learnt much, including several of the lessons shared in this blog. All in all, we will continue working, from the bottom-up, to create more resilient landscapes and societies in the face of wildfires.