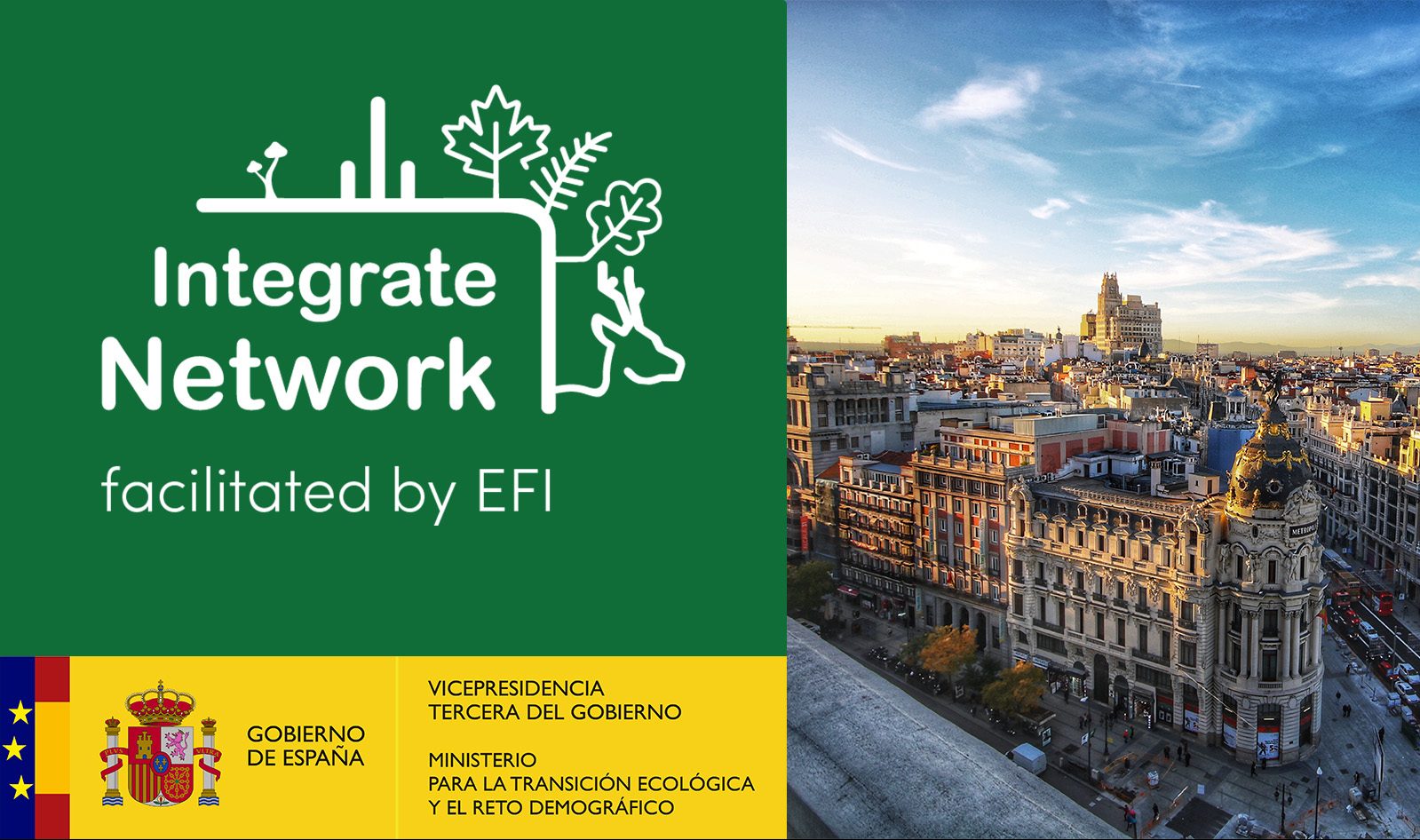 A great asset of an European-wide network, such as the Integrate Network, is to regularly meet and exchange with many interesting colleagues from across Europe on a wide range of highly relevant forest-related topics and issues! Especially rewarding is to visit Integrate Network members in their home countries and get in-depth insight to forests, their management, and related challenges and opportunities. Recently, the current chair of the Integrate Network, Spain, invited the Member Countries and interested participants to gather for the 8th Annual Integrate Meeting in Madrid. In the tradition of meeting in fall, between October 19-21 around 40 participants discussed relevant developments of the Integrate Network and voted on important next steps; shared experiences on forest management approaches in the Mediterranean and went on an excursion to the Valsaín forests where they learned on how the tool of demonstration sites is being applied in education and training for main management challenges.

Elsa Enríquez Alcade, representing the Ministry for the Ecological Transition and the Demographic Challenge (MITECO), and the current Integrate Chair Leopoldo Rojo Serrano (MITECO) kicked off the meeting and welcomed the participants to Madrid.

To set the scene for further discussions and networking opportunities amongst the Integrate Member Countries, the first presentation was held by the former Chair, Christoph Dürr (Switzerland, FOEN). He highlighted the network’s achievements and pointed out the opportunities related to the new structure and funding scheme of the Integrate Network under a EFI facilitated Multi-Donor-Trust-Fund. An essential part of the Integrate potential is to provide knowledge and scientific findings on the science-policy interface. This was also pointed out in the presentations of Peter Loeffler and Stefanie Schmidt (DG Environment of the European Commission). The lively discussion following the inputs from the Commission reflected on the potential contribution of the Network to EU policy processes. It was noted during the discussion that the Integrate Network had provided input to the public consultation process on the new EU Forest Strategy in March 2021, resulting in being mentioned in the strategy as an example of good practices in forest management to preserve and restore biodiversity.

Being in Madrid provided a great opportunity to hear from colleagues from the Mediterranean on how they are dealing with forest disturbances in the past and lessons learnt from the challenges of the past years for forest management of the future. The session “Connecting Knowledge to Action: Adaptation and management for more resilient forests in the face of climate change and disturbances” consisted of three presentations covering the topics of droughts; forest fires and a practice intervention from the Extremadura Forest Administration. Andrés Bravo (Spanish National Research Council of the National Museum of Natural Sciences) pointed out the importance of species composition for the adaption process. There was agreement with Víctor Resco de Dios (University of Lleida), who stated that forest fires are no longer only a Mediterranean challenge, but  also regions in  Europe so far not considerably affected by fires. Enrique Balbuena Gutiérrez, from the Extremadura Forest Administration then gave a practical example of forest adaption in a pine-dominant area in western Spain.

The afternoon started with a brainstorming session on possibilities for the Integrate Network to cooperate with other projects. Bernhard Wolfslehner, Head of EFI Governance Proramme and Elisabeth Pötzelsberger (Head of EFI Bonn and Resilience Programme) presented potential projects and led the discussion. It was acknowledged that the Integrate Network can have a valuable role in upcoming project calls dealing with integrative forest management in particular due to its linkages and outreach to policy, practice and research.

The next session looked into the potential of the Integrate Network in the context of a future EU Regulation on Forest Monitoring. The presentation by Rubén Valbuena (Swedish University of Agricultural Sciences) entitled  “Main objectives and features for forest biodiversity monitoring” was followed by Elena Robla González (MITECO) who talked about ”Systematic field and lab monitoring of biodiversity by the National Forest Inventory of Spain ”. Concluding, Christophe Bouget (French National Institute for Agriculture, Food, and Environment – INRAE) presented in how far marteloscopes have the potential for contributing to a monitoring system of forest biodiversity in Europe.

Besides the topical scope of the three days, the Annual Meeting involved the discussion of organizational matters of the network such as voting on the new chair for the upcoming year (2023), discussing the working agenda of the Network and providing a platform for an exchange between Member Countries on best practice and different forest management approaches.

The Spanish Chair further made it possible for Members not physically present to join the voting session online, so the votes could be taken up by 16 out of 19 Member Countries, which also proved a very high interest of country members in the Integrate Network activities. With great pleasure, it was announced that Luxembourg will take over the Chairmanship of the Integrate Network for 2023. Michel Leytem (Ministry of the Environment, Climate and Sustainable Development Luxembourg) expressed that he is well aware of the responsibility that comes with taking over the Chairmanship but is very much looking forward to this task. He also emphasized the challenges forest management is facing and the answers Integrate Network can provide:

The day ended in an extraordinary Spanish networking atmosphere where everyone had the opportunity to dive into the Spanish food culture, but also exchange with all present participants.

About one hour drive from Madrid, the scenery changed completely, and we found ourselves moving upwards to 1900 m passing ski lifts for the winter season and beautiful pine forests rich in flora and fauna. The Valsaín forests are located on the northern slopes of the Sierra de Guadarrama. After a beautiful walk in the forests, we arrived at the marteloscope site “Monte de Valsaín” where we learned from Javier Donés and José García (MITECO) about the concrete forest management approach about the concrete forest management approach for that particular forest area. After an introduction on the use of the I+ Tablet software participants were divided in small groups for a virtual intervention exercise in the marteloscope. What made it interesting was that all groups had the same exercise task (e.g. extract only pine trees with diameters above 30 cm). Engaged discussions took place in the groups on which trees to remove, which to retain, how to enhance natural regeneration and how to accumulate dead wood. After the exercise the groups presented their individual results to the other groups. This led to a lively exchange with the groups explaining their management interventions which were quite diverse in their outcomes. The group then headed back, and the bus took us to Segovia for a traditional lunch. Following the lunch, participants were rewarded with a very informative guided tour through historic Segovia, a city well known for its aqueduct.

Day 3: Application of marteloscopes- insights from different regions in Europe

The next and final day of the meeting was fully dedicated to marteloscopes. After having gained fresh memories of the marteloscope exercise during the excursion the day before, it was inspiring to hear from marteloscope managers from across Europe about their experiences, updates, and suggestions for the future. Following the Manager Workshop in Bonn in June and the demand for a more regular practical exchange, the Integrate Secretariat developed a forum on the Integrate website that allows a frequent and more regular informal exchange amongst forest practitioners. We warmly invite interested marteloscope managers to join the forum.

Andreas Schuck (EFI) kicked-off the morning session. The first block of presentations was dedicated to the Mediterranean perspective of marteloscope managers. Juan Garrote Haigermoser (Regional Forest Service of Asturias) gave a presentation on new management approaches of the native broadleaved woodlands of Asturias” followed by Begoña Abellanas Oar and Enrique Urbano Fuentes-Guerra (University of Córdoba) ) who gave insight on their marteloscope in a cork oak stand while Luis Guada González (Forest Innovation and Engineering, INNUFOR) explained on how to integrate biodiversity and non-timber products in Mediterranean forestry. The next presentation “Climate risks and bioeconomy: old drivers, new context for forest management in Catalonia” was held by Teresa Baiges Zapater and Teresa Cervera Zaragoza (Forest Ownership Centre of Catalonia). David Lasala Sánchez (Agresta S.Coop) closed the session by sharing his observations of applying marteloscopes in education and training over the last 13 years .

The final session of the Annual Meeting allowed marteloscope managers from across Europe to share their experiences. ”From South to North and East to West” starting with Ireland and Jonathan Spazzi (Teagasc) on the Irish marteloscope training network „Exploring integrated management potential with forest owners, foresters, forestry students and ecologists.” Heading from Ireland to Italy, the next presentation focused on the experiences with forestry students acting as forest managers in a marteloscope located in the  Apennine, by Giovanni Santopuoli (University of Molise).

Carolin Stiehl (Wald und Holz NRW) reported on the establishment of marteloscopes and training programmes in North-Rhine-Westphalia, the most dense populated federal state in Germany. From the far north, Ari Talkkari, (Karelia University of Applied Sciences (Finland)) presented the use of marteloscopes for forestry education and training in Eastern Finland. Heading to the east of Europe, Sergiu Florea (Forest Design) from Romania, introduced Virtsilv- a complementary solution for locating, recording and monitoring trees of marteloscopes.

The meeting closed with a farewell from our Spanish hosts, and a heartly invitation from the new chair Michel Leytem to the Meeting next year in Luxembourg.

Concluding, in the name of the Integrate Secretariat and all participants, we would like to sincerely thank our Spanish colleagues from MITECO for facilitating and hosting this excellent Integrate Meeting in Madrid. We all enjoyed your outstanding hospitality! Now we would like to make use of the energy we all took home with us in order to strengthen and further develop the Network for the future!

The article was first published on the Integrate Website.