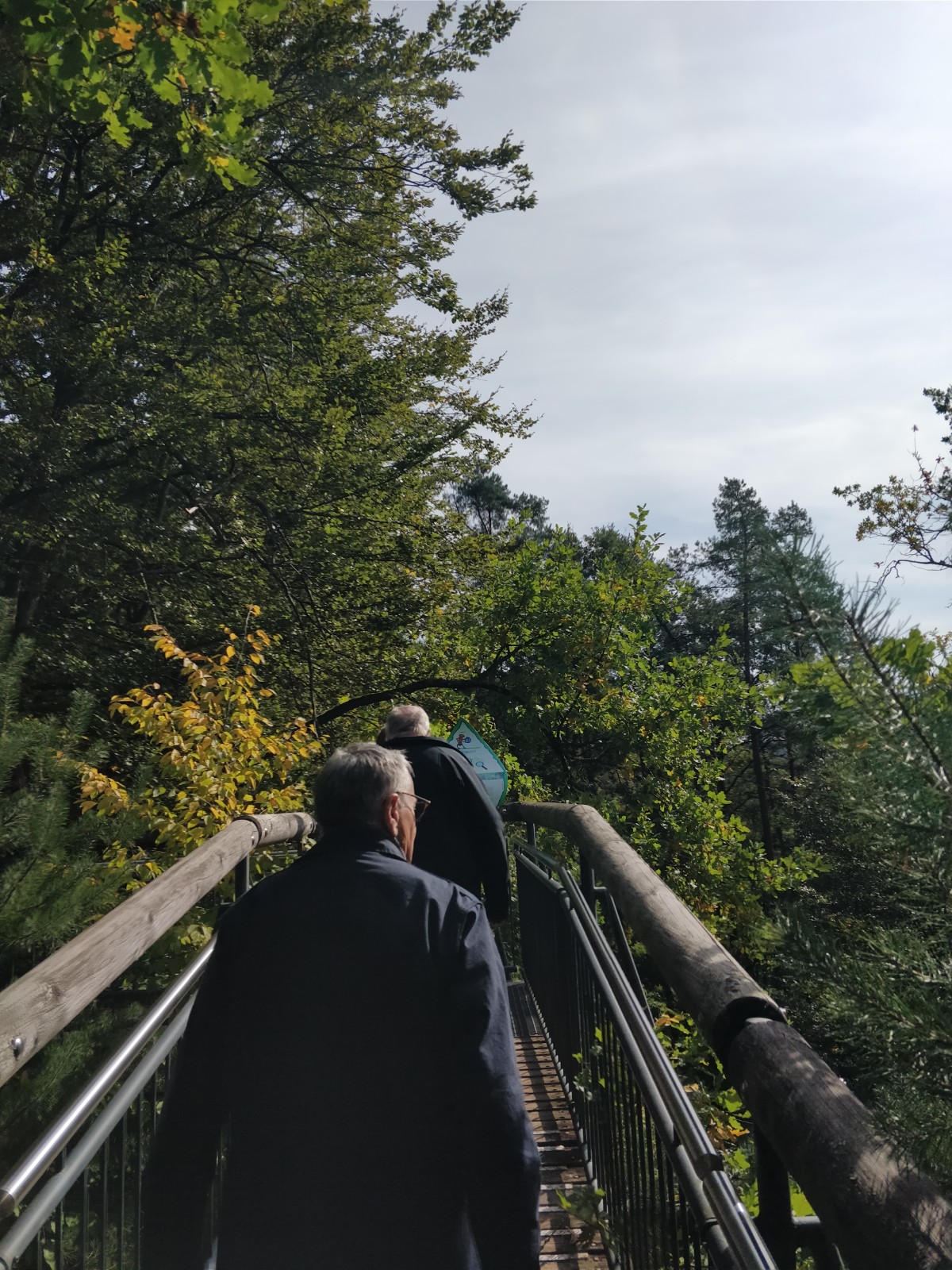 Humans originate from arboreal primates, so to really understand the forest, you have to experience it from the canopy. This is what the famous French botanist and conservationist Francis Hallé believes. Despite his respectable age, the spry octogenarian had no issues demonstrating his capability to do so on the tree top path next the biosphere centre in the Pfälzerwald.

Located on the French border, in the middle of the largest contiguous forest in Germany, this centre is the location of the Wasgauer Gespräche/les entretiens du Wasgau. Every second year, this bilingual event brings together people from the French and the German sides of the border to talk about various nature-related topics. This year’s question was: how much nature do humans need? Speaking on behalf of EFI and the Integrate network, I was the only presenter to talk about the pragmatic need for wood, and how integrative forest management can be a solution for providing needed draw materials while also conserving biodiversity. This however does not mean that it is the best solution everywhere. In some places a more intensive management style makes sense, while in others the wise option is to leave nature to itself. And this is exactly the case made by Francis Hallé during the opening session of the event.

Francis Hallé is an authority in France when it comes to the architecture of vascular plants, and he is at the root of plenty of tree-related findings, such as tree timidity (when crowns of certain trees seem to carefully avoid each other), the phenomenon of trees forming a superorganism or the effects of lunar phases on tree growth. He gained public notoriety after the success of his documentary film “Il était une forêt”, directed by Luc Jaquet. After spending much of his professional career in the tropical forests of Indonesia, Ivory Coast and Congo, he is now retired and lives in his native country France. But retired does not mean inactive, on the contrary. Blown away by the beauty of the primeval forests in the tropics and inspired by what he saw in the Białowieża forest in Poland, he is now trying to create a new “primary” forest in Central Europe, covering at least 60.000 hectares. The search regions include the Ardennes, a forested region shared between France and Belgium, the Forêt du Risoux on the Franco-Swiss border, and of course the French/German Vosges du Nord- Pfälzerwald where the event took place.

While his plan may seem like a utopian dream to many, he argues that it corresponds to the size of the small Mediterranean island of Menorca, and that there are plenty of unpopulated regions in Europe that would suffice. He does not try to justify his ambition with rationalised arguments about ecosystem services, increased income from tourism or carbon storage. The sense of awe and the wonder that he felt in primeval forest all over the world is enough to support his ambition. The intrinsic value of nature does not need further justification, even though there may be a manifold of positive externalities. He however does acknowledges the importance of getting the local population on board. If the inhabitants of the towns surrounding the forest don’t see the advantage, a project of this magnitude is doomed to fail.

Francis Hallé’s youthful enthusiasm inspired many participants. His friendly and understanding character definitely helped. On a continent where the decoupling of welfare and raw material use has already started, and where large swaths of land are increasingly sparsely inhabited, recreating a primary forest is maybe not completely unfeasible. Changing social expectations and a growing support for rewilding practices add to that argument. You may think he’s a dreamer, but he’s not the only one.