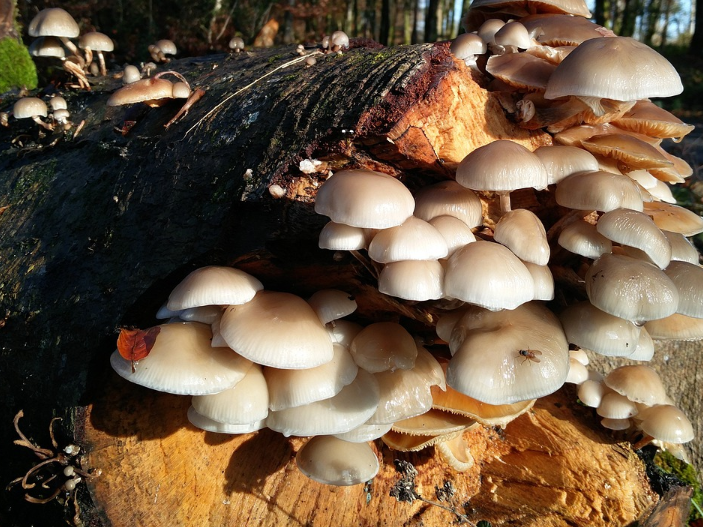 What Twitter images tell us about COP27 issues: A focus on the Forests and Climate Leaders’ Partnership and Biodiversity Day

In our previous exploration we looked at how Twitter hashtags can help us inquire into emerging public issues around global events like COP27. In our rapid exploration, based on the digital methods recipes developed by SUPERB partners at the Department of Digital Humanities, King’s College London and the Public Data Lab, we identified different ways people engage with forest restoration through keywords like #conservation, #afforestation, and #rewild. Hashtags such as #forestsarenotfuel and #lettreesgrow problematised the economic use of forests. Political matters also came up, linking the Amazon rainforest and changing politics in Brazil.

COP27 was undeniably an important meeting to follow up on last year’s Glasgow Leader’s Declaration on Forests and Land Use, where over 140 world leaders pledged to “halt and reverse forest loss and land degradation by 2030”. This year’s COP also saw dozens of governments collectively announcing the Forests and Climate Leaders’ Partnership (FCLP), and the day dedicated to biodiversity acted as a platform to discuss the progress of the Glasgow commitment.

While our earlier exploration helped us look into emerging public issues online by following hashtags, other digital objects like images can provide additional insights. To this end, we conducted a quick scan on COP27 Twitter, aiming at repurposing images found in tweets.

By querying for #cop27, we collected Twitter data from two distinct periods: 7-8th and 16-17th November 2022 (see the below table). While forest-related topics surfaced throughout COP27, we were curious whether the launch of FCLP and Biodiversity Day brought up issues associated with forests and restoration.

Following this recipe on the Public Data Lab website, we stacked the top 10 images during those periods. We then looked at the dataset captured around the FCLP.

Interestingly, one can see several images featuring Rishi Sunak, a new UK prime minister who made a speech on the occasion of the FCLP launch on 7 November. The most tweeted image (4552 tweets) shows Sunak in a vehicle parked next to a plane. Another image is a screenshot of the Independent’s tweet, with the text “Rish Sunak ‘pays £10,000 for a private helicopter trip to Tory dinner”. At the back, there is also an image of Macron and Sunak. This image was tweeted by the UK prime minister, stating, “Great to meet with @EmmanuelMacron today at #COP27”. 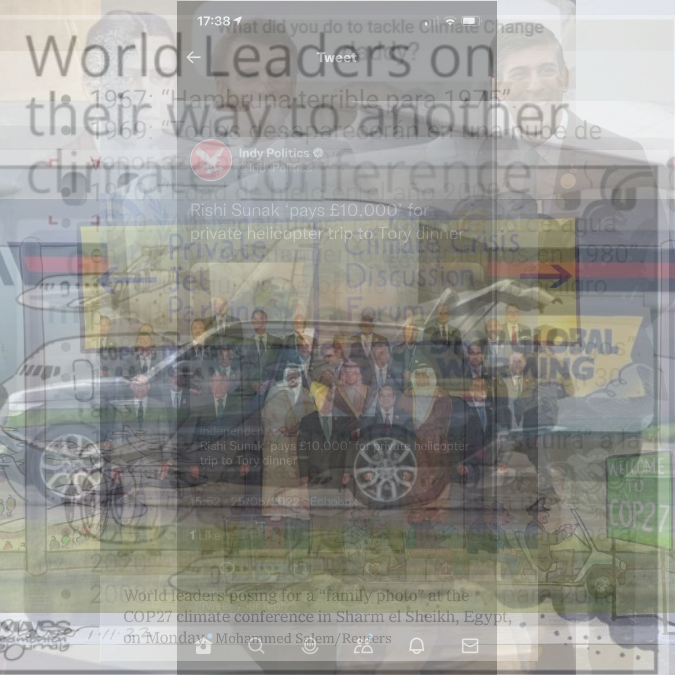 Apart from the photo of Sunak next to a jet, there are several other images of airplanes. For example, an image tweeted 1298 times shows an illustration of jets with a giant banner saying “Stop Global Warming”. Another photo shows a flock of aircraft with the text, “World Leaders on their way to another climate conference”. These images suggest the irony of delegates from all over the world flying thousands of miles to be in one place to discuss climate solutions and how to reduce carbon emissions.

Finally, this image tweeted 2519 times shows a group portrait of delegates at COP27, with the caption “a family photo”. This image appeared in a tweet with 28.8K likes mentioning, “At this point, maybe we should ask women for help. #COP27”.

To sum up, we see some indirect links between the top Twitter images and FCLP, as they feature heads of state like Sunak and Macron, who attended the launch event. Apart from that, criticism towards COP’s carbon footprints also surfaced in the top images several times.

What about the top images from Biodiversity Day?

As shown in the below stack image, the most images visible on Biodiversity Day are Brazil-related. Four of ten in the top 10 images featured the newly re-elected Brazilian president, Lula. For example, the most visible image shows Lula (2712 tweets) giving a speech at COP27. Other images featuring Lula are sitting at the back, including those with Climate Envoys from the US and China and with Marina Silva, a former minister of environment in Brazil. Lula’s reappointment has been widely celebrated, raising “hope for the Amazon rainforest”.

While Lula is visible in several images from Biodiversity Day, there are other Brazil-related images, including one featuring a representative of the Amazon Institute of People and the Environment wearing a T-shirt saying, “We’re back, bitches!”. Forest issues were thus indirectly brought up on Biodiversity Day through Brazilian political issues. 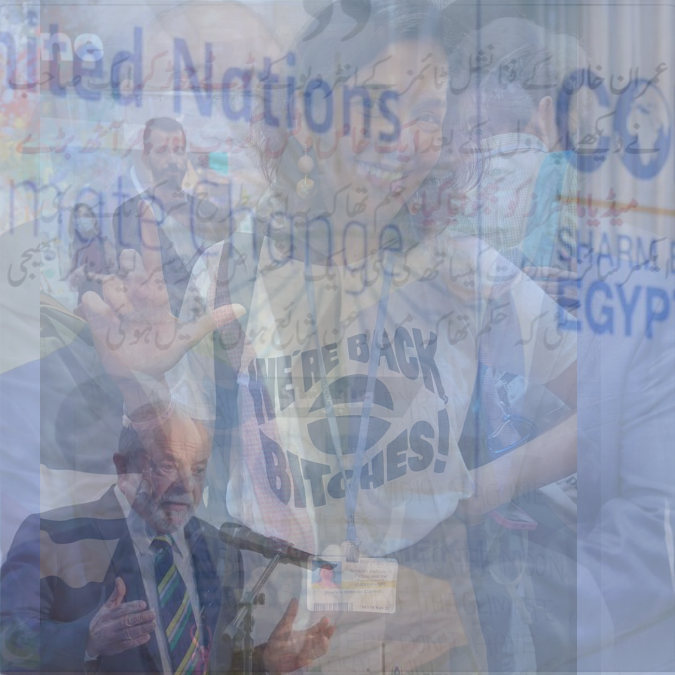 While political figures were the most visible in the stack images, we wanted to see if forests and restoration issues also surfaced in other top images.

Based on this recipe, we ranked the top images with more than 100 tweets for each period. 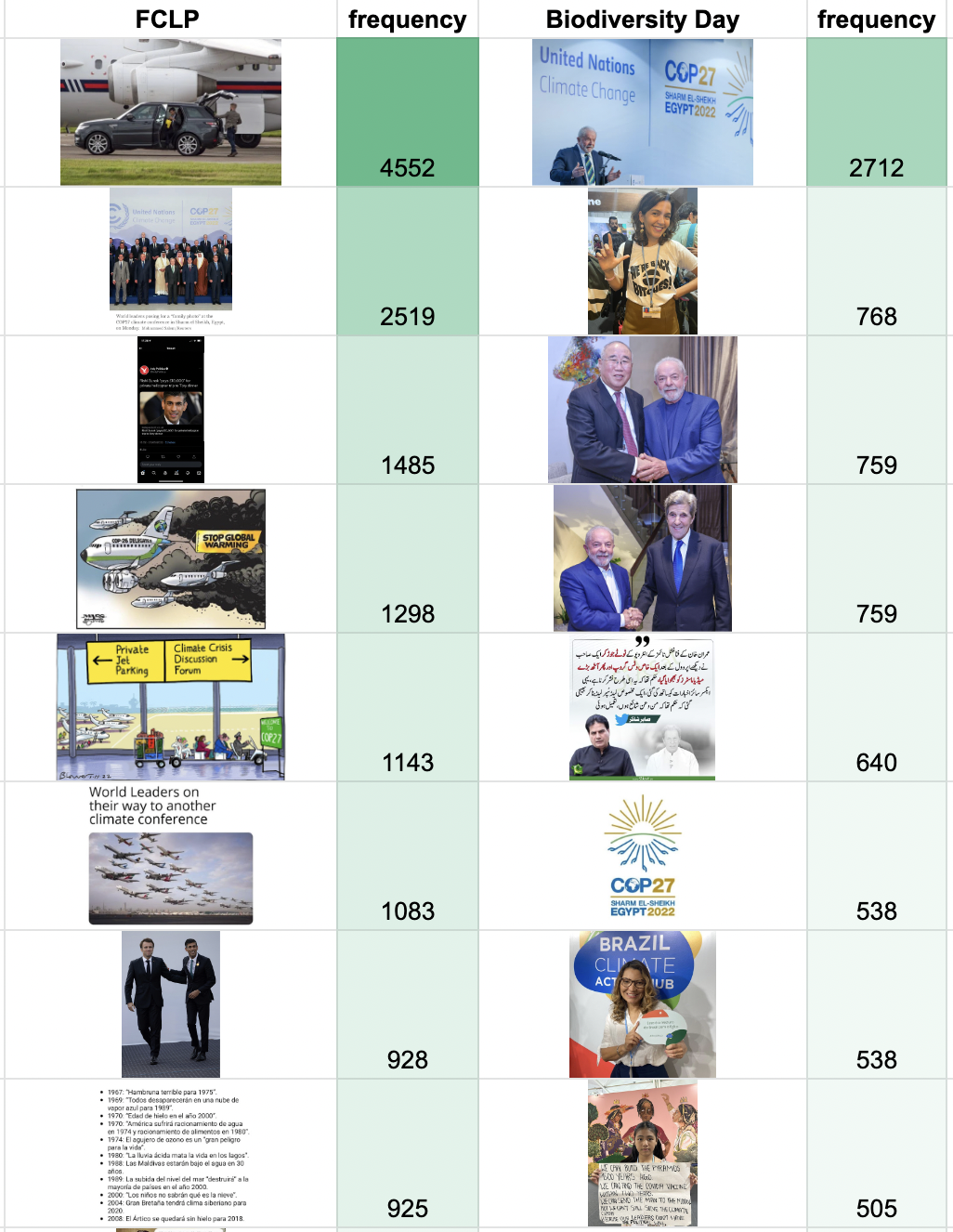 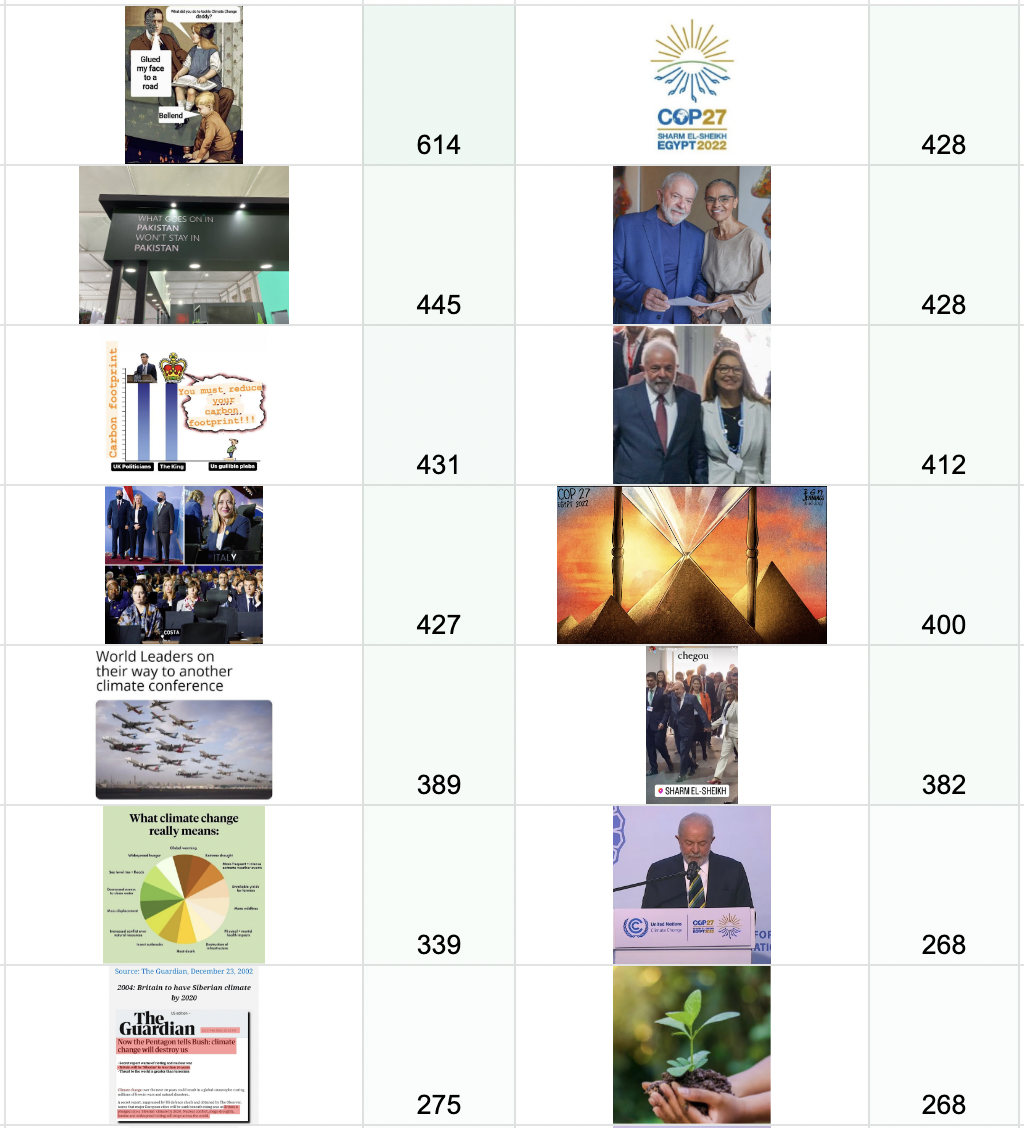 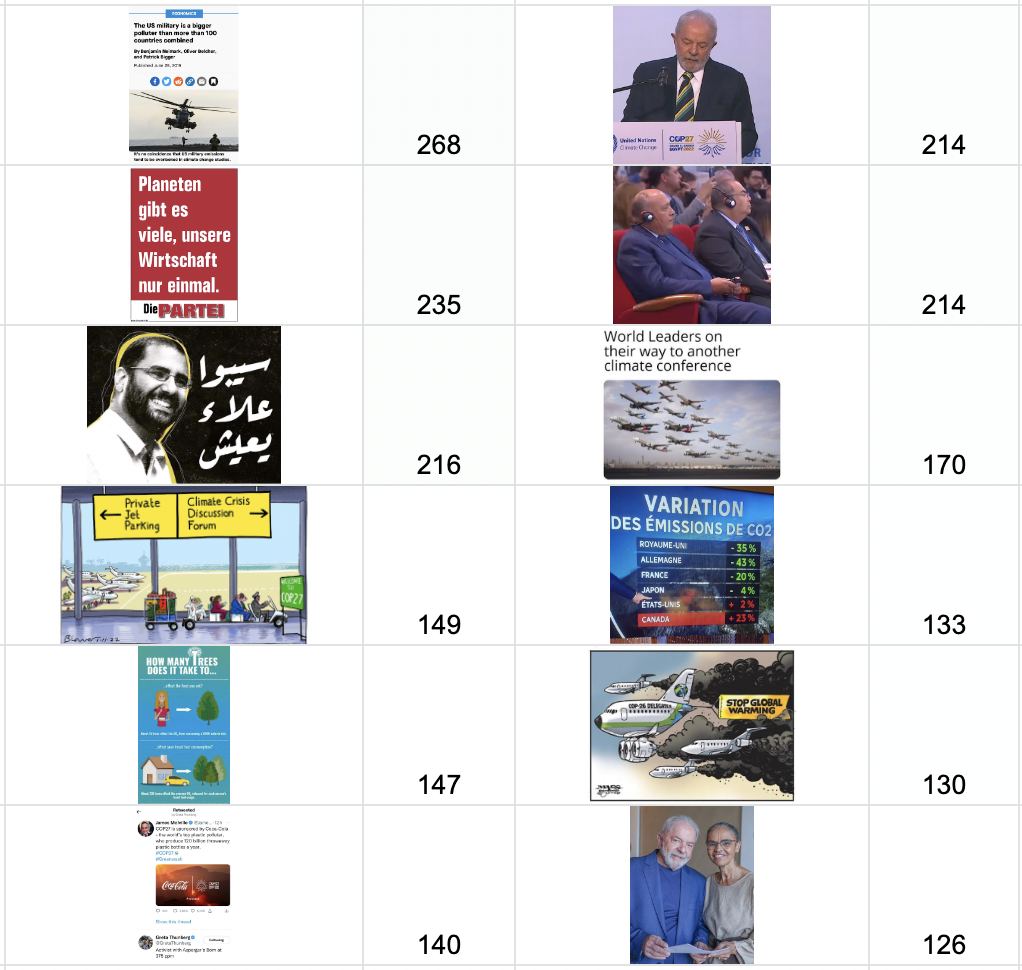 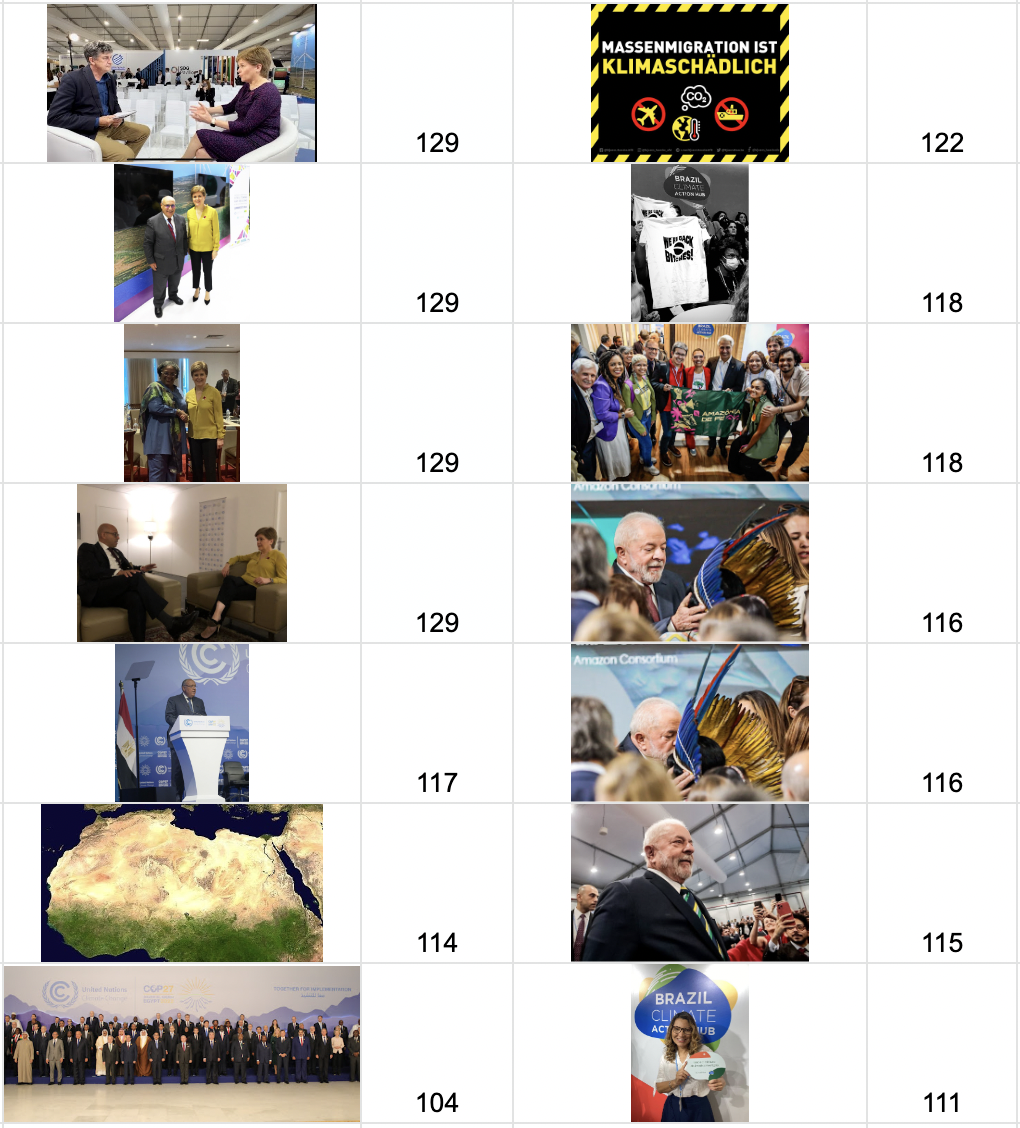 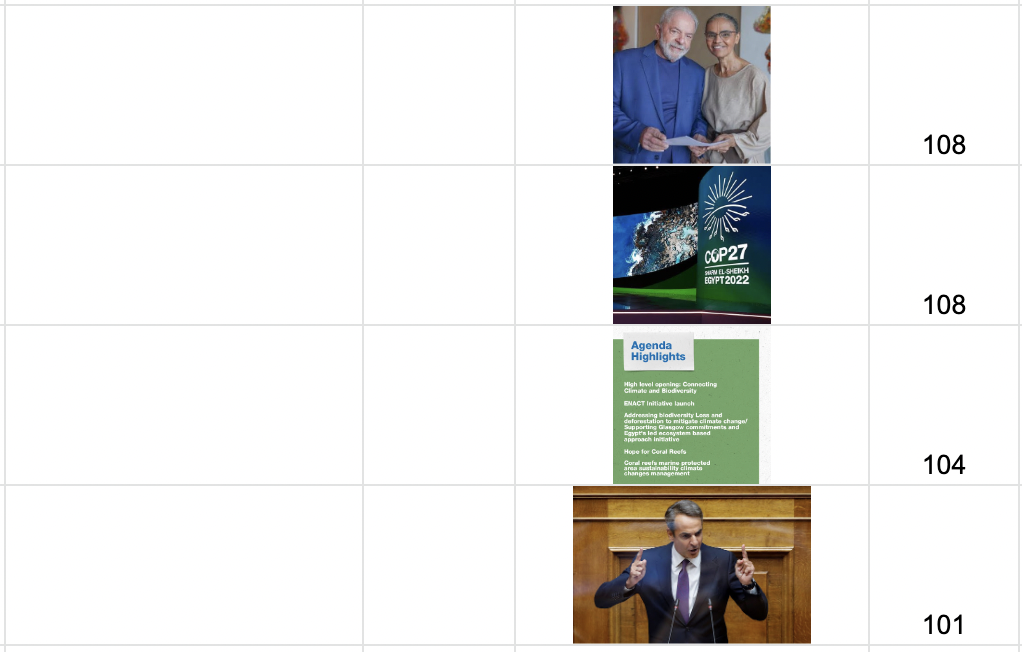 Apart from political figures, quite a few images address climate impacts, including an image with a pie chart saying “what climate change really means”. It is also possible to see several images pointing fingers toward specific actors. For example, a screenshot of a media article criticises the US military as a big polluter. This image features a young activist with a poster saying, “Our leaders don’t have the political will“. Coca-Cola was also criticised for being “the world’s top plastic polluter”.  There is also a screenshot of CO2 emission variation per country, where Canada scored the highest.

There are, however, only two images that show a direct association with forests. The first one illustrates the number of trees needed to offset the CO2 generated by human activity. The second one is a stock image, tagged with keywords like ‘forest’ and ‘conservation’, which is recurrently used in media articles referring to World Environmental Day like this one.

Building on our previous work on forest hashtags, with this little inquiry we have looked at what images can tell us about climate politics and forest issues. We look forward to further exploring how following and gathering other digital objects could provide different perspectives on forest restoration issues in the coming years.