End of January, I (the urban forestry consultant at EFI’s Resilience Programme) was invited by the Beijing Forestry and Parks Department of International Cooperation for a study visit and a training on urban forestry.  China is one of the leading countries when it comes to afforestation: in 2018 alone, about 6.6 million hectare new forests (or the size or Ireland) will be planted. The new forests are not only situated in the rural areas, but also in and near urban agglomerations. In the last Beijing province (area: 16.000 km², inhabitants: 22 million) for example, about 67.000 ha additional forest has been planted over five years, mainly for landscape and aesthetical reasons, but also for recreation purposes. In the next five years, they are aiming for an additional similar area.
Site visits
The study tour started in one of the mayor urban redevelopment projects that Beijing has seen: the 2008 Olympic Quarter. The Olympic Park (680 ha) has been built on former built-up area and farmland, and is situated at the central North-South axis through Beijing which connects the Olympic Park with the central Tiananmen Square. The park includes an artificial lake where soil was reused for building an artificial hill. The composition of the park follows the traditional Chinese design of building with the back to the hills and the front to the water.
The park is heavily used for recreation. Unless during very cold conditions, we noticed many people jogging or walking in the park. The recreational equipment is very well developed (sign-posted walks of several distances, with indications at regular intervals), underground stations are close by. The park is also an important step stone for ecological connectivity. The park is crossed by the 5th Ring Road around Beijing; a 50m wide ecoduct (also carrying a wide paved walk- and driveway) links the Northern part (more close-to-nature) with the Southern part (traditional Chinese garden design) of the park.
The existing forests are managed according to “close-to-nature” (CTN) management, and an important question from practice is how to realise CTN afforestation. Mixing species is difficult due to low experiences in management. Another question from a practical perspective is how to design afforestation in order to improve biodiversity and recreational benefits, but also how to design forest corridors (how wide, which species etc.). 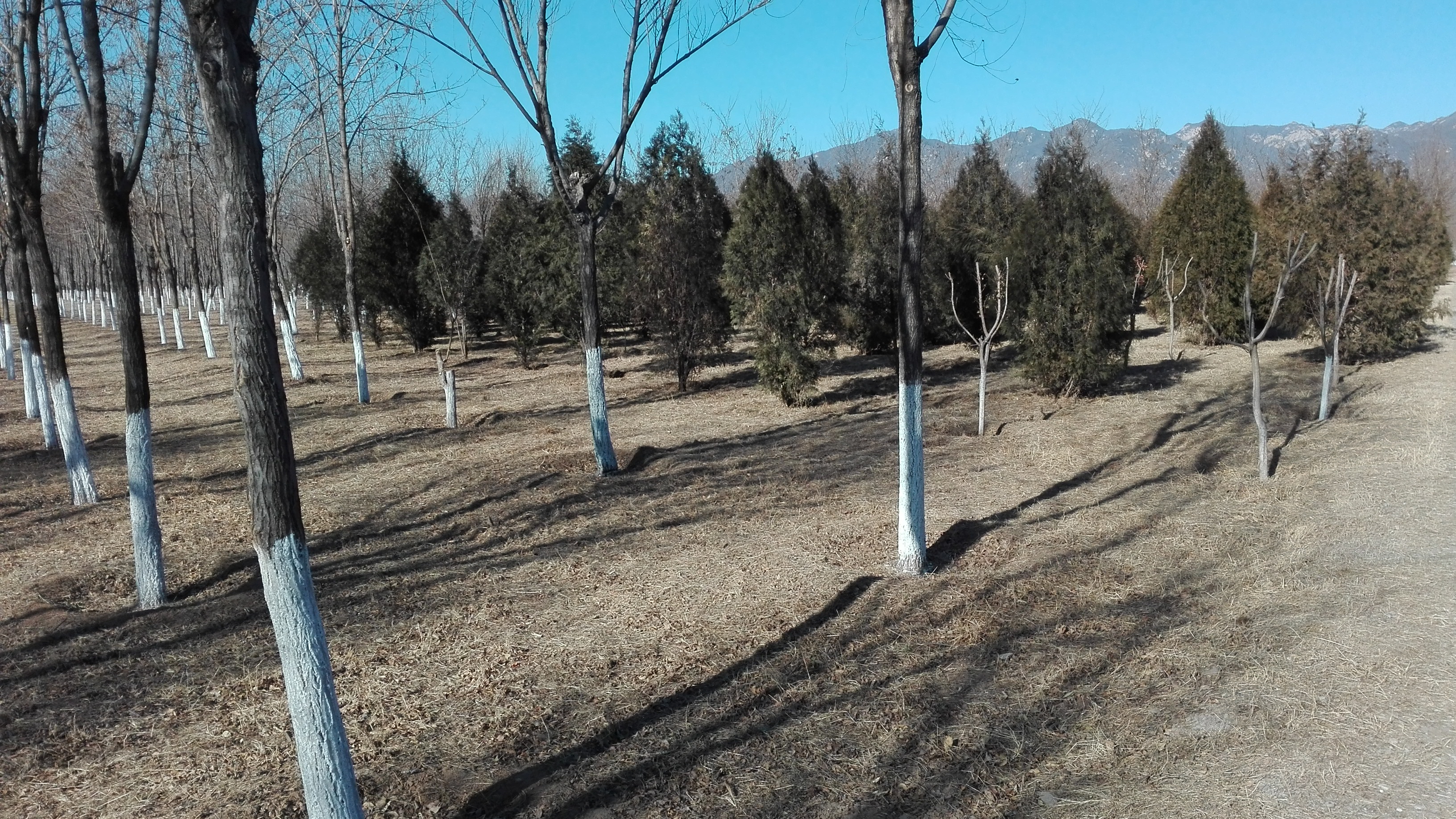 In the Miyun county (2277 km², 461 000 inhabitants), we visited a 1000 ha large new urban forest, planted in 2013 on previous agriculture land. This forest is situated between six townships, and has been planted with mainly local species such as Pinus bungeana (lacebark pine), Populus tomentosa (Chinese white poplar), and Platycladus orientalis (Chinese thuja). The planting material used is rather large (diameter about 8 cm), and the densities are rather low (about 2 to 3 m in the row, 2 to 4 m between the rows). The plantation is mixed, using large blocks of a single species (e.g. 50 m x 50 m or larger). The forest is planted for several reasons, including to protect the large Miyun water reservoir, which is one of the drinking water reservoirs for Beijing. The forest is established within the Grain for Green–programme which includes payments for ecosystem services: farmers who see their land afforested, receive a compensation for income loss, and are involved in forest management activities (forest and agriculture land are state-owned).
Not only establishing the young trees, also the management applied after planting is very different from practices applied in Europe: intensive irrigation (autumns and spring are very dry), weeding and mowing (weeds cannot be higher than 30 cm) and twice a year applying lime-sulphur solutions at the lowest meter of the trees (insects, sunburnt, aesthetical) are very labour-intensive. Also dead trees are removed (including roots) of coppiced, to prevent fire risk. 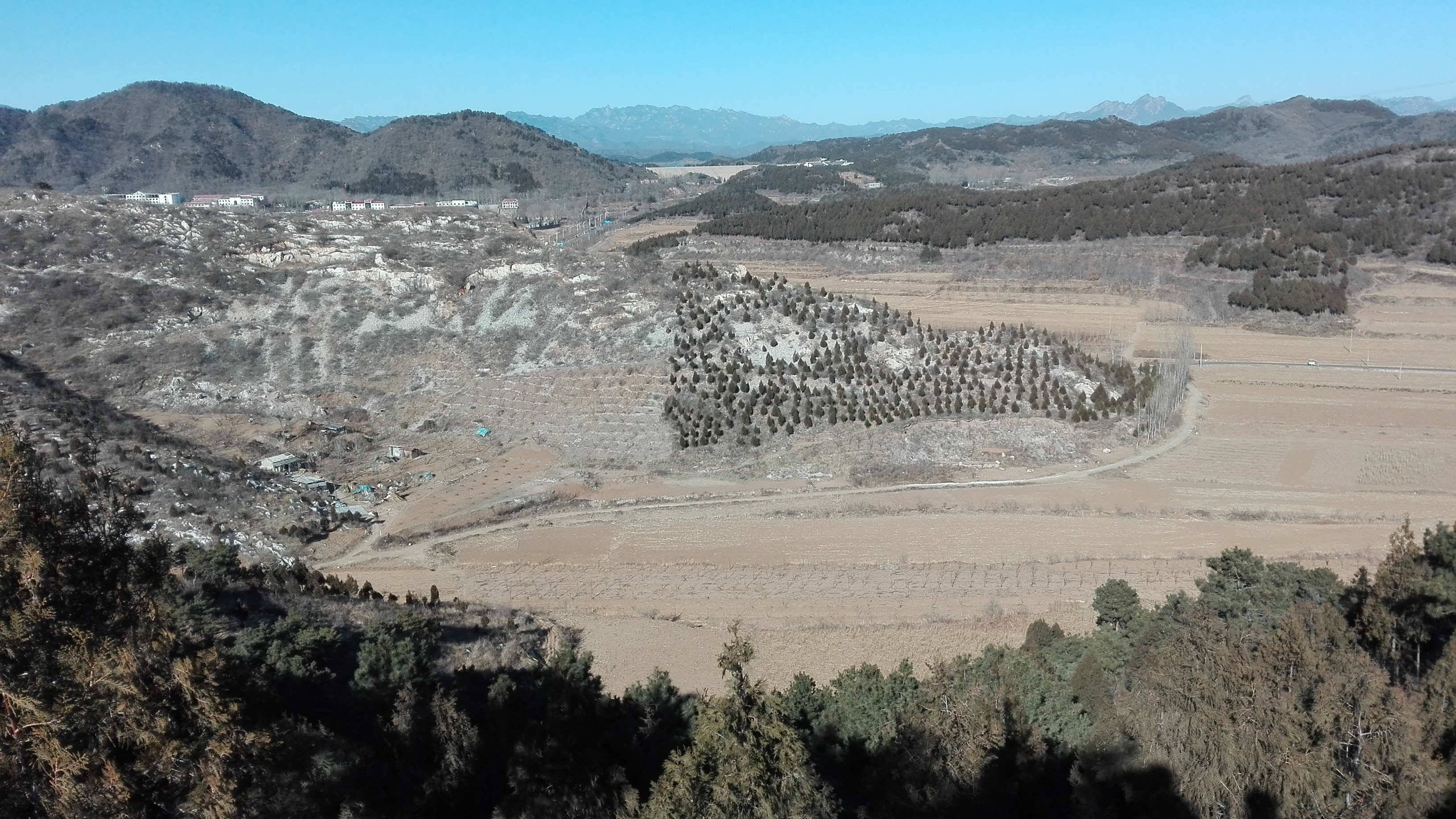 Observations & recommendations for more resilient urban forests
We have been impressed by the intensive increase of the tree cover in the last five year in the Beijing province. The quality of the tree layer in the plantations is generally good (few dead/dying trees), but the structural quality and biodiversity of the afforestation is very low. This is due to the absence of an understorey (no shrubs, weed is controlled intensively). It was interesting to find out that one of the main reasons for the missing understorey is the fact that forest managers are held responsible for forest fires, and so they avoid biomass accumulation at the forest floor. As a result of the weeding and mowing, the soil below the trees is sparsely vegetated or even bare. This not only has a negative impact on biodiversity, it also makes the soil more vulnerable to erosion and run-off, but also leads to increased evaporation of soil moisture. We also learned that cultural preferences impact the forest floor: Chinese people appreciate bare soil or maintained grassy vegetation above wild shrubs and herbs.
Below we sketch some recommendations for improving the ecological and social resilience of the urban forests we have visited.
First recommendation: reconsider fire risk and associated measures

Second recommendation: increase structural quality of the plantations
The current afforestation practice in the Beijing province is planting about 2.000 trees a hectare. Based on our own experience with afforestation in Western Europe, we suggest to apply high densities plantations of 5.000 saplings per hectare, in single-species groups of about 7 by 7 trees (1 m between the trees) that are in close configurations. In these configurations, small saplings (80 – 120 cm, 2 to 3 years old) can be used. We also suggest to mix species individual or in small groups, instead of the current practice of planting quite large groups with single species. Moreover, we suggest to plan shrubs in the understorey.
The advantages of high-density plantations with small saplings:

Third recommendation: establish field laboratory to test afforestation configurations
Experience with “close-to-nature” afforestation is limited in Beijing. Therefore, we suggest to establish a field station where different afforestation layouts or afforestation designs are tested and monitored. The network of Landscape Laboratories (such as in Alnarp, Sweden) is exemplary for this. These field or landscape laboratories are effective assets for further learning and research, both for practice and science.