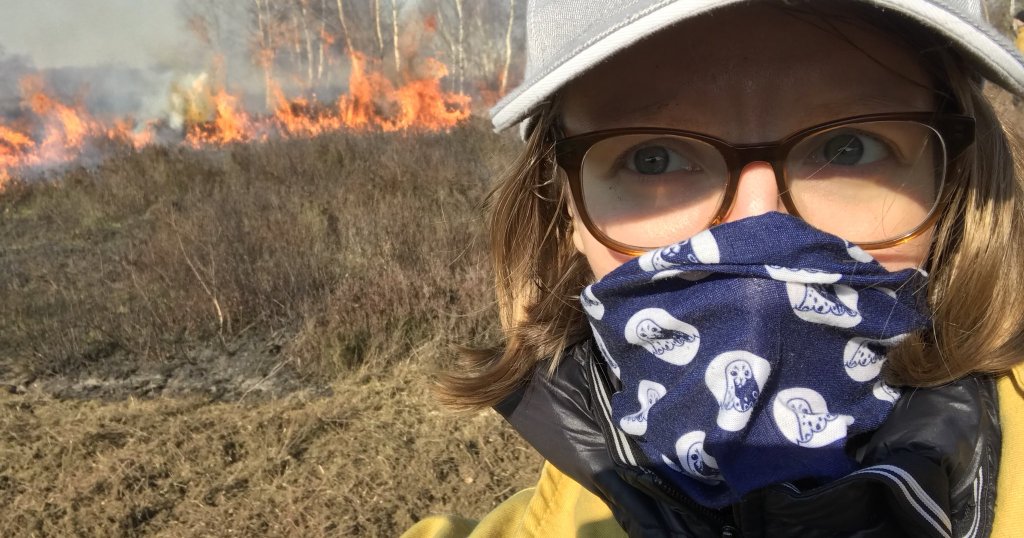 by Johanna Strieck and Laura Nikinmaa
To round up an already eventful week at the EFI Bonn, EFI-Senior Expert Alexander Held took us (Laura Nikinmaa, Junior Researcher and Johanna Strieck, Communications Trainee) last Friday, February 24th  to controlled heathland burning to the Drover Heide, nearby Bonn, to learn more on fire management and to get an idea of its practical application in the field. It was a great day for making your first experiences with controlled burning, and the compact small-scale operation on 10-15 ha allowed plenty of time for explanations. Sun exposure and wind speed was quite high and the level of humidity was moderate to high. 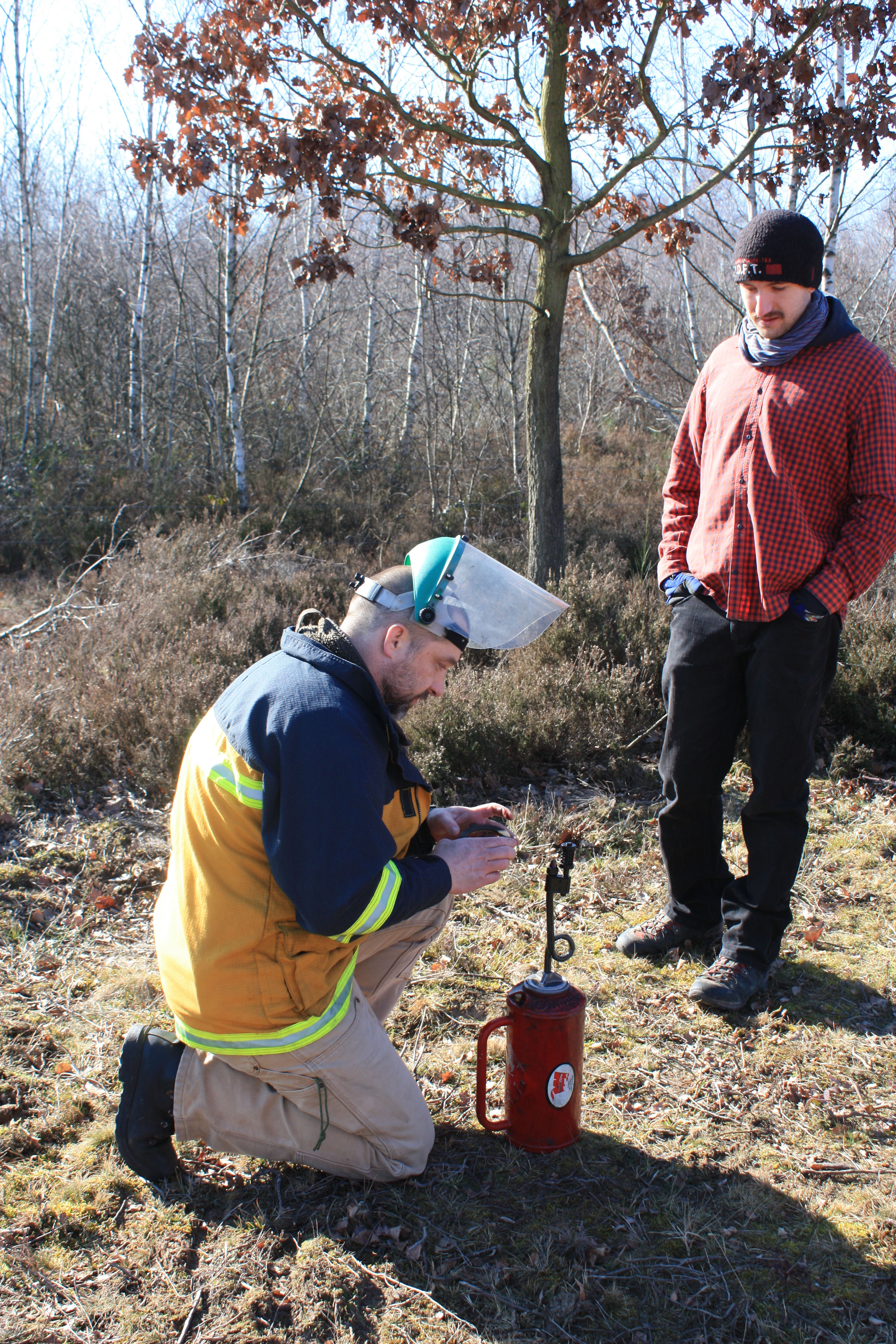 Fire is a cruel master but a useful servant when properly managed. The weather conditions play a crucial role: without wind the fire is slow to advance and the land does not burn well, but with too much wind there is a risk of the fire getting out of control. Sun exposure and relative humidity create the conditions for ignition: in sun, the relative humidity of the air decreases and in turn creates drier micro-climate around the fuel. Sun also increases fuel temperature; this facilitates the ignition of the fuel. It is also important to know the fuel characteristics of the vegetation: some plant species have chemical compounds that make them light up in flames explosively while others burn more moderately.
The area of the Drover Heide and the surrounding agricultural land is former military ground, which provides shelter for rare species like the nightjar but where you will also find tree as well as pool frogs in abundance. Friedl Busch, a local organic farmer collaborating and burning with Alex Held since 10 years already, took the time to explain the effects controlled burning can have on the nature conservation and biodiversity in open heathlands. 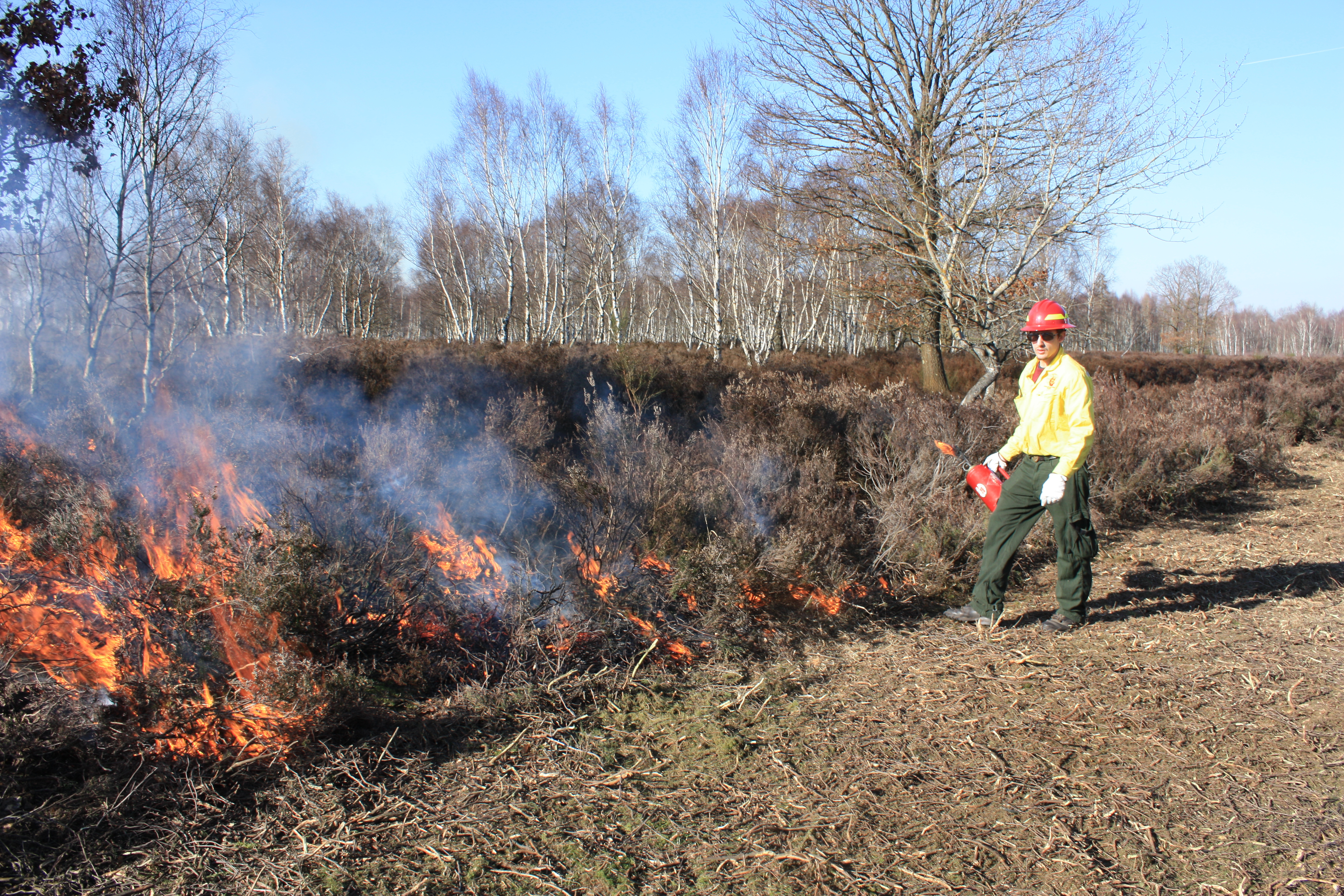 The ‘Bio-Station’ has foreseen a management plan for the whole area, which includes highland cattle and goats to help prevent overgrowing of the heathland. The grazing – like the controlled burning –has its place in the management plan of nature conservation and biodiversity.  “We burn these parts and after a few months, you will see my cows with their mouths completely black from digging through the ashes searching for fresh buds. We managed to reduce bush encroachment and to create an open heathland, on clay ground, with mainly beeches and some oak trees in-between”, says Busch.
Controlled fires are important for maintaining biodiversity, but they could also be immensely useful for training firefighters and more general fire management on landscape level according to Alex Held: “This would be a great way for firefighters to get first-hand experience on how fire behaves and how it is affected by weather, the type of fuel and the slope, as well as the role of aspect  of the landscape.” In the light of recent megafires, more efficient fire-management is needed. Alex Held hopes that in future, the controlled fires to maintain biodiversity would be included in general fire management. “They could be strategically planned in a way that would maintain the important habitats, but also act as fuel breaks to prevent catastrophic fires from forming”, he says.
It was a day full of fun and new perspectives, most importantly first-hand practical experiences – building a broader knowledge base for our future articles and reports.