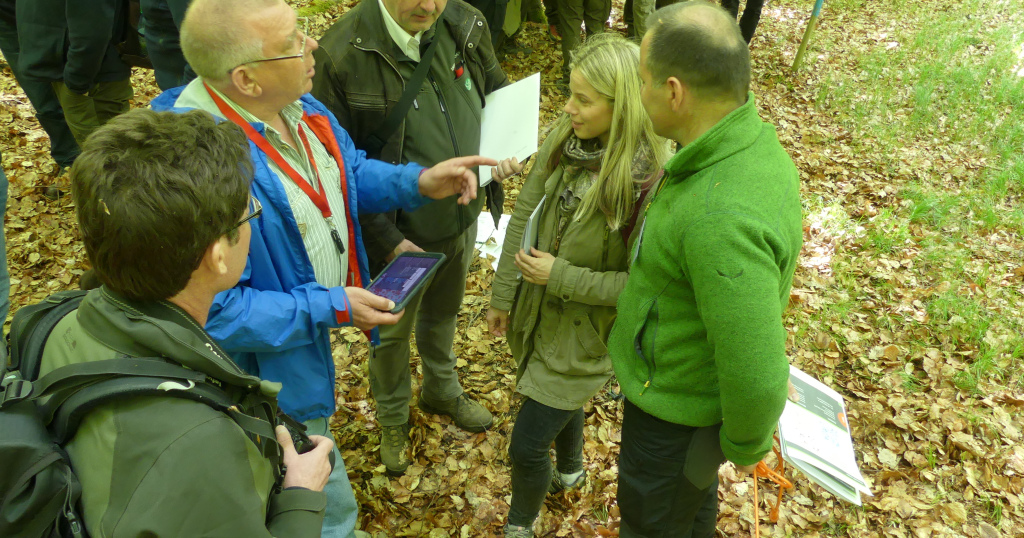 When Marteloscope managers meet. Succesful workshop in the Steigerwald

By Jakob Derks and Andreas Schuck
The Steigerwald, one of Germany’s largest deciduous forest, was almost in summer attire when a group of forest experts from 12 different countries met for a workshop, organized by Andreas Schuck and Jakob Derks from the European Forest Institute and Daniel Kraus from the Bavarian State Forest Enterprise. No less than 45 participants gathered to exchange experiences related to the use of Marteloscopes in the Ebrach forest district. The group was composed of forest and nature conservation managers, forest administration and ministry representatives as well as scientists from different disciplines. Norbert Vollmann from the newspaper Mainpost wrote an article in German about the workshop.

The main aim of the workshop was to provide Marteloscope users with the opportunity to share experiences with established demonstration sites, by discussing planned and implemented activities. Participants gave feedback, explored new potential developments and applications of sites and exercises.
A number of participants presented their experiences and findings to the group, unveiling among others plans to enhance the use as a training tool for foresters and to organise exercises for the broad public, in order to increase the awareness of the different forest functions. Joint trainings between different stakeholder groups, notably foresters and conservationists, remain a focal point for many users. A remarkable presentation was given by one of the founding fathers of the Marteloscope idea, prof. Max Bruciamacchie from AgroParisTech.
Besides the practical use of the tool in forest training, there was also the opportunity to exchange with the developers of the “I+” software – Sergey Zudin, Simo Varis and Tommi Suominen from EFI – on how to further tailor it for exercise and analysis. “I+” is the centre piece of communication in the field exercises as it allows you to see results directly of virtual interventions and thus serves as the basis for stimulating fact based discussions on site. This user friendliness, allowing instant analysis of the data in the field, is very much appreciated by the users. There is, however, still room for improvement, and that is why a number of aspects of the software, such as the interface design, analysis tools and management, were discussed in smaller groups. This led to a number of suggestions, ranging from very practical ideas on how to improve the legibility on the screen on a sunny day, to the integration of more advanced growth models calculating the impact of the thinning on the stand’s increment. The results of the group work were collected and will be processed together with a questionnaire that was sent out before the workshop, in order to enhance the use of the “I+” software.

During the workshop, how field exercise results can serve as input to science was also highlighted. Social science researchers at the University of Freiburg and the WSL in Switzerland are actively using exercise outcomes which are generated by the “I+” software. Dr. Tobi Schulz, from WSL, presented initial results in his presentation followed by a lively discussion.

… and experiencing the outdoors.

Besides the indoor workshops, there was also room for interesting excursions in the Steigerwald. A highlight of the workshop was the joint field visit to the Steinkreuz Marteloscope, the oldest Marteloscope of the Integrate+ Network. Here, the participants discussed, hands on, their needs for new “I+” software features. A second stop was the so called ABC-level thinning experiment, one of the world’s oldest forest research plots. The aim was to test different thinning intensities. For more than 140 years thinning took place in a 5 to 10-year cycle. This plot is now highly relevant for investigating the effects of thinning intensities on tree microhabitat development. The third stop was the strict forest reserve “Kleinengelein”. This old beech forest is described in forestry literature as a one of a kind stand in Germany concerning dimensions and qualities, and has received worldwide fame. The management history of this stand led to around 225-year-old beech trees of more than 90 cm DBH and a height of over 50 m.

Overall, the workshop was very constructive and highlighted the interest in using Marteloscope and the “I+” software for education, training, communication and science. There are many things to do and, jointly with such an active, growing and dedicated network, this will be more than successful! The EFI Bonn team thanks all workshop participants for their engagement and important input to take the use of Marteloscope to a next level!
Pictures: Klaus Striepen and Jakob Derks