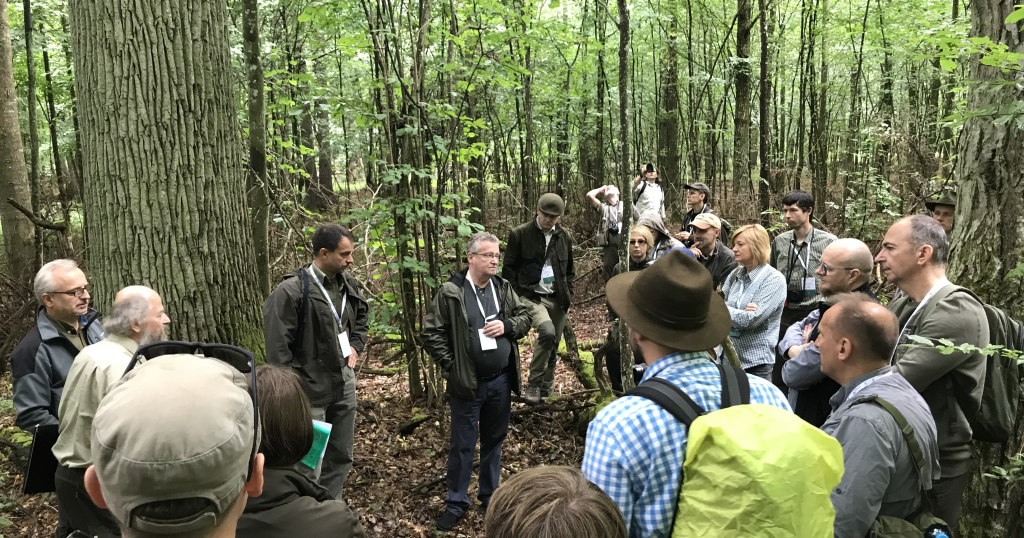 Bark beetle outbreaks and the future of European forests

How are different European countries dealing with bark beetle outbreaks and which role do questions like sanitary cutting, monitoring systems, forest ownership, windstorms and expectations towards nature conservation play? What are the challenges regarding climate change? How do the social perception of active and inactive forest management impact forester’s activities in local forests? Which tools should be used to cope with natural disturbances and how we can educate foresters, policy makers, and other relevant stakeholders? Following the invitation of the Polish Ministry of Environment and the Polish State Forests, we discussed these and more issues in the Białowieża Forest during a working seminar of the European Network INTEGRATE from 25-27 June 2018.

The Białowieża Forest (Polish: Puszcza Białowieska, Belarusian: Белавежская пушча, Biełaviežskaja Pušča) is a large forest complex including both conifers and broad-leaved trees. It is situated on the border between Poland and Belarus and covers a total area of 141,885 hectares. The area is recognised due to biodiversity richness and it is often described as one of the last remaining primary forests in Europe. The Polish part of the Forest consists of 63,164 hectares managed by two independent state organisations: the Białowieża National Park (10 517,27 ha) and The State Forests Nation Forest Holding (52,647 ha). In 2012, a bark beetle outbreak started in the Bialowieza Forest. European spruce bark beetle (Ips typographus) which flies and reproduces in spruces is about a fifth of an inch-long beetle. It feeds under the bark (mostly spruces) and as a result of this activity, it kills the tree. Insect outbreaks (gradations) happen cyclically. They emerge when conditions are right for flourishing (e.g. during hot and dry seasons, or after a windstorm). The current outbreak has already affected more than 10% of trees in the Białowieża Forest. Due to the recent outbreak in the Bialowieza Forest, the meeting was a great observation lab for the participants. It allowed for insightful presentations and discussions but foremost, for field excursions and an exchange of expertise on the ground.

Most of the participants came from Poland, Slovakia, the Czech Republic, Germany, and Latvia. Also, representatives from Croatia, Denmark, and Belgium joined the seminar. 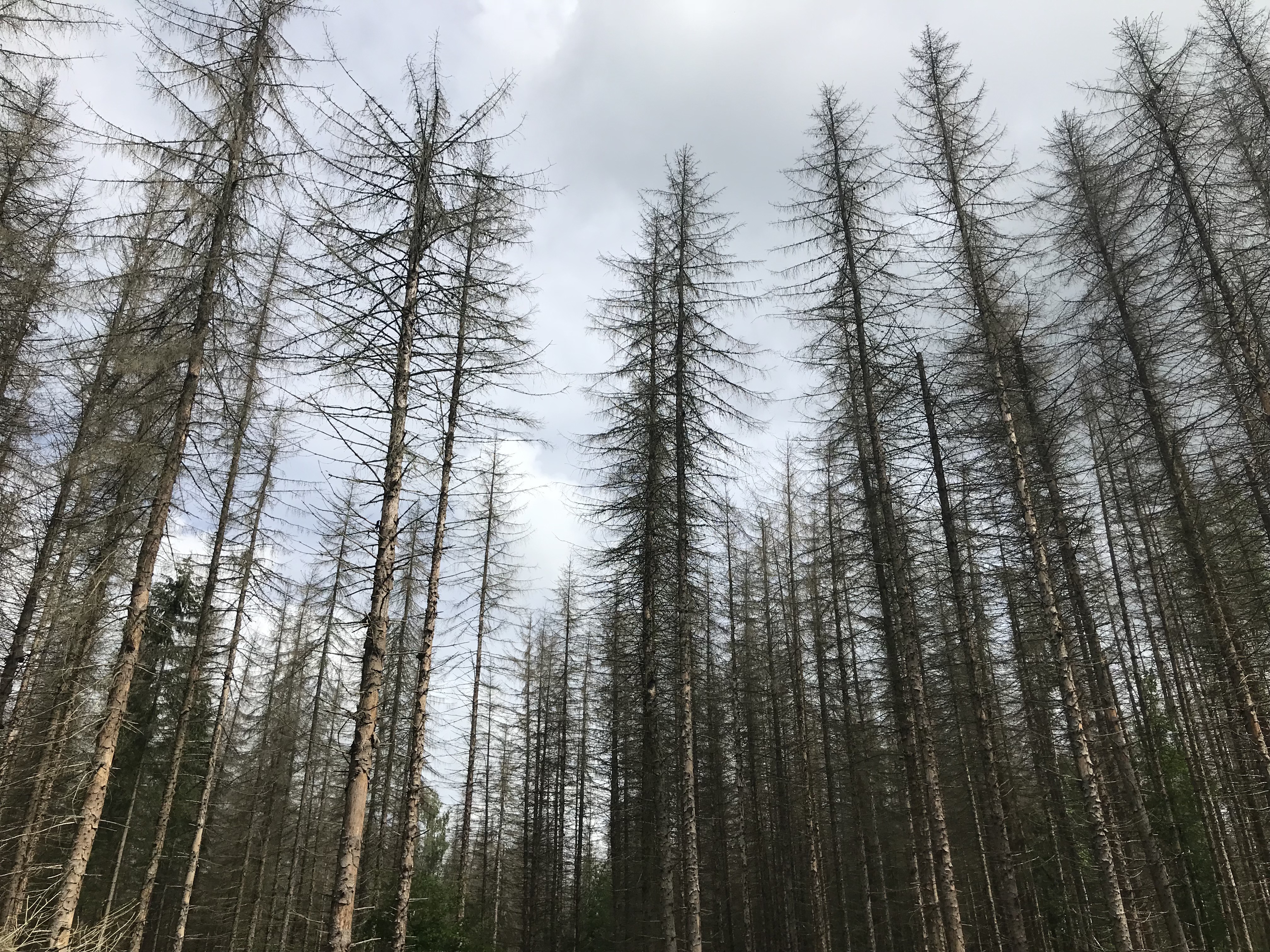 Exploring different stages of the bark beetle outbreak
The first part of the meeting was an excursion to the forest managed by the Bialowieza Forest District (State Forests). With our guides – Jan Tabor (General Directorate of the State Forests) and Andrzej Antczak (Bialowieza Forest District) – we visited three forest stands facing different stages of the bark beetle outbreak and one showing a stand’s conversion based on forestry principles. We followed the revised chronological order and started with the after-outbreak stand where we had an opportunity to discuss two important problems:
(1) What kind of approach should be applied in after-outbreaks stands: natural or artificial forest regeneration? We learned that in the Bialowieza Forest for this purpose foresters have been using seedlings produced from seeds collected only in the Bialowieza Forest. However, this approach is contested by a part of a scientific community and environmental organizations which postulate the need of an elusively natural regeneration in the Bialowieza Forest.
(2) Thus, the participants exchanged their experiences on social demands and expectations towards nature conservation and discussed the increasing criticism towards forester’s activities. Visible marks of this tensions in the Bialowieza Forest are colorful signings left by environmental organizations on logs questioning the legitimacy of the logging.

While visiting three reminding stands there was an ongoing exchange on a stands’ conversion, polycyclic harvesting systems, sanitary cutting as well as Natura 2000 requirements and nature protection regulations. Thomas Haußmann from the German Federal Ministry of Food and Agriculture started a discussion on the impact of game on forest regeneration. This, in turn, led to an exchange on the African Swine Fever.

Exchange of experiences and possible solutions
The second part of the seminar was dedicated to the exchange of experiences. After the opening presentation by Professor Jacek Hilszczanski from the Polish Forest Research Institute who summarized the biodiversity situation in the Bialowieza Forest and pointed out currently endangered species, the participants had an opportunity to talk about the situation in their own countries and elaborated on the methods applied to manage bark beetle outbreaks. In six presentations “the bark beetle challenge” was discussed. Milos Knizek from the Forest Protection Service presented an overview on the insect pests in forests in Czechia. Tomas Krejzar from the Czech Ministry of Agriculture pointed out that in the Czech Republic the problem of a bark beetle is interlinked with many aspects, what forces his Ministry to developing a complex approach to the issue, including negotiations with the Ministry of Industry, the Ministry of Transport, and more affected by the outbreak. Furthermore, he emphasized the challenge of a lack of human resources in Czech forests they are facing and stressed that they would need about 6.000 more people to do forest-related work.

Dr. Ralf Petercord from the Bayerische Landesanstalt für Wald und Forstwirtschaft shared an overview of the situation in German National Parks. He brought the participant’s attention to the phenomenon of recent windstorms in Central Europe and shared his experience on bark beetle monitoring in Bavaria. The conclusion of his presentation was his statement that the bark beetle is the most important forest pest in Central Europe. 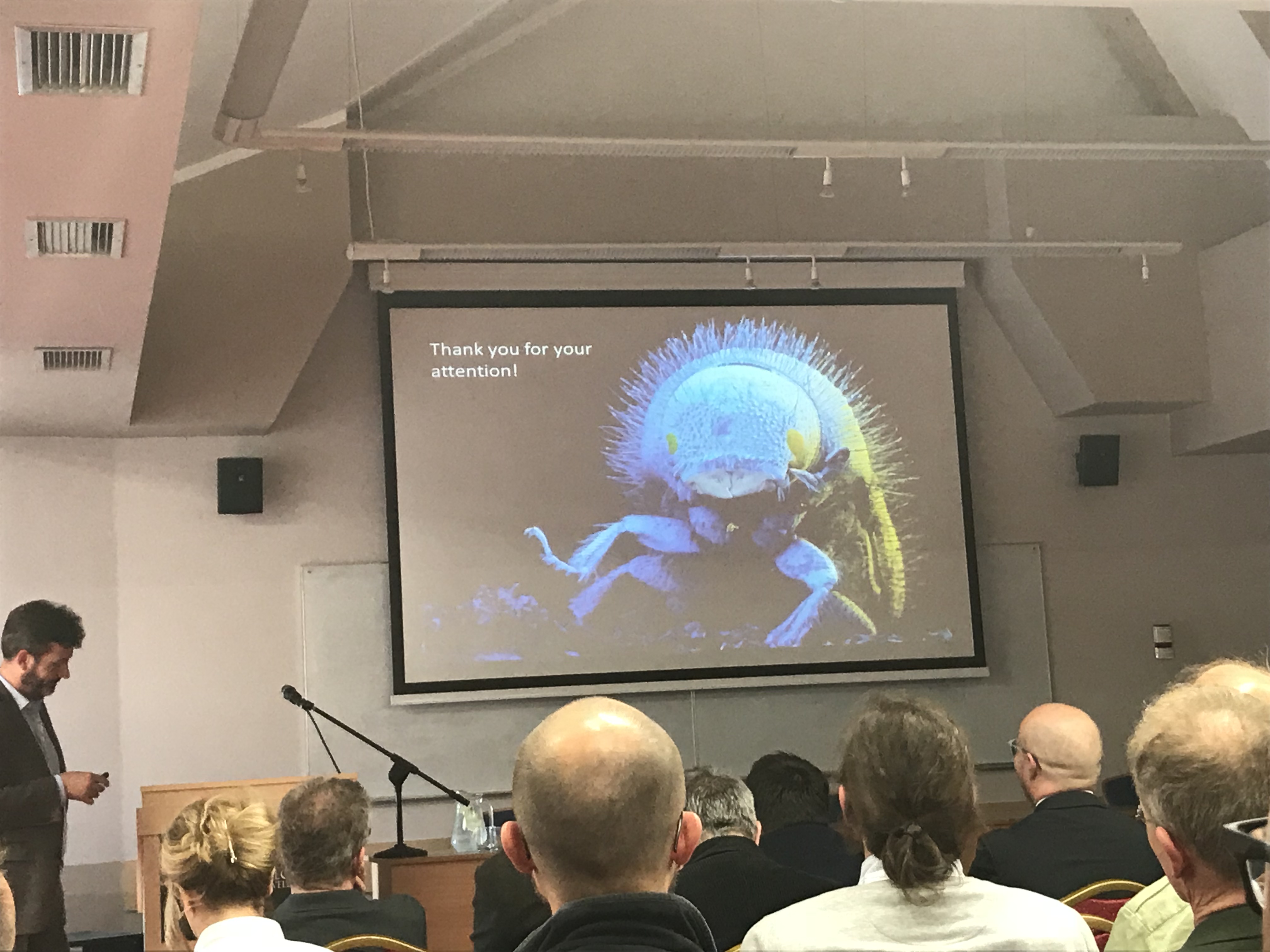 The next two presentations (Andrej Kunca and Matej Schwarz) elaborated on the situation of Slovakian forests, where especially the case of the Tatra Mountains was of a high interest. It was followed by more practically-oriented feedback by Edijs Laisavniks from Latvian State Forests on the monitoring and preservation of the bark beetle damages. Finally, the most southern case was presented by Professor Boris Hrasovec talking about the situation in Croatian Dinarides. The presentation session was concluded by one more Polish input by Jan Tabor who summarized the recent situation in the Bialowieza Forest and emphasized that from the State Forest’s point of view the connection of two approaches to conservation (active and inactive) seems to be the best solution.

Visiting the strictly protected area of the Bialowieza National Park
The third part of the seminar was a trip to the strictly protected area of the Bialowieza National Park. Together with park managers and rangers (Andrzej Karczewski, Mateusz Szymura, Malgorzata Szpakowicz), we took a 7 km long walk through the strict reserve. While stopping a few times, we discussed the condition for the oak regeneration, the historical logging in forests at the end of the 19th century, the situation of population of European bison and its pressure on the forest, as well as past and present interactions with the forest (beekeeping, use of linden bark, income from tourism, and demographical changes in the local population). 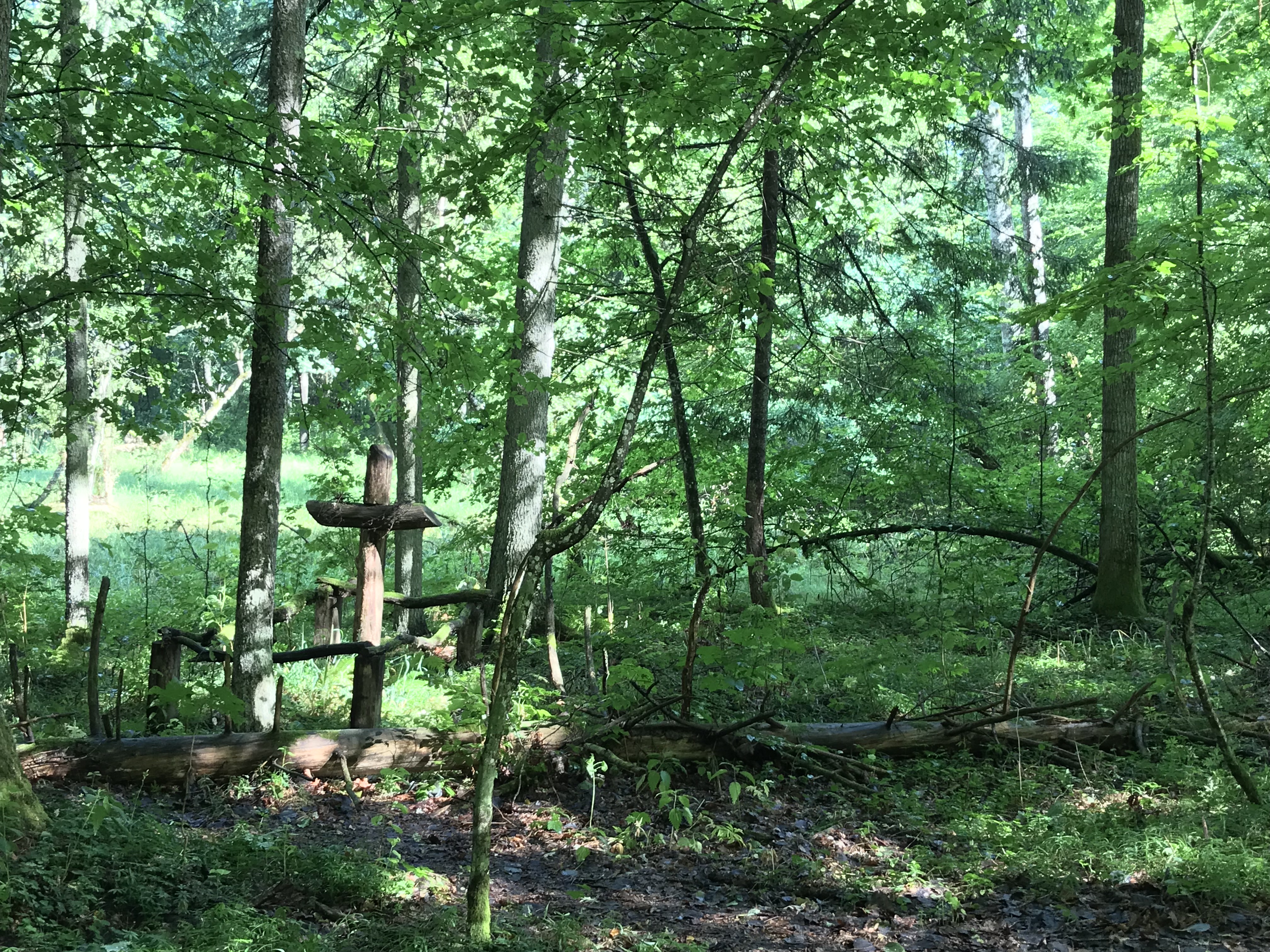 In the Bialowieza Forest, we learned that bark beetle outbreaks have not only a significant impact on the ecology and biodiversity of European forests, but numerous consequences for local communities, environmental policy, forestry knowledge, and practice. While thinking about the resilience of our forests, we have to keep this small, but crucial beetle in mind.