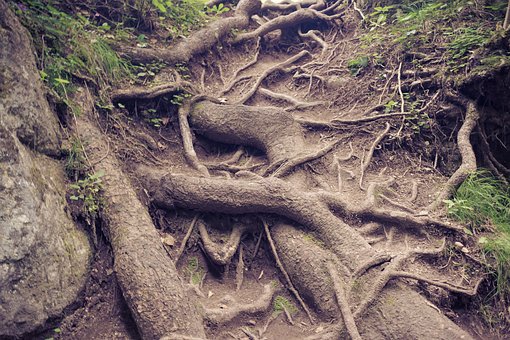 The symmetry of competition: does the battle take place above or below our feet?

In this article, I talk about the “mode of competition”, in other words whether trees of different species compete more of aboveground or belowground resources when growing in mixed stands. Additionally, I highlight the advantage of mixed forests in the context of climate change.
If you have read some of my articles like What factors determine whether tree species compete or complement each other?, you know how much I like mixed forests. Forests rich in tree species not only are known for providing higher levels of ecosystem services but also be prompter to cope with unexpected disturbances and climatic changes. However, the mechanisms of competitions in multi-species forests are all but clear. Scientists are still studying which combinations of tree species grow better in a particular environment or what factor promote or reduce a positive growth complementarity in secondary forests and/or plantations. In one of my latest posts on the blog Forest Monitor I have tried to explain in simple terms the concept of how complementarity for a give species can be positive or negative when growing in association with other species depending on resource availability.
While working at the Swiss Federal Institute for Forest, Snow and Landscape Research (WSL) for the project Swiss-SpeMixMod (“Integrating Species Mixtures in Tree Growth Functions for Forest Development Models in Switzerland”), my colleagues and I set up a study to evaluate patterns of complementarity on individual-tree growth for the major central European tree species growing in a total of 19 mixture types. As a follow up, we entered a bit more into the specific. We focused on mixed forest composed of the three economically most important species growing in the country: Norway spruce, silver fir and European beech. This time we did not explore how differences in complementarity are modulated by environmental factors but we aimed at better understanding the different modes of intra‐ and inter‐specific competition in these two‐ and three‐species mixed forests. Our goal was to disentangle if species interactions in spruce‐fir‐beech forests are more associated with size‐symmetric (i.e., competition for belowground) or size‐asymmetric competition (i.e., for aboveground resources). In other words: is it a battle crown-to-crown or roots-to-roots?
To do so, we could take advantage of the entire Swiss National Forest Inventory (NFI) database. The Swiss NFI is based on terrestrial sampling on a 1.4×1.4 km grid of permanent plots covering the entire country with measurements taken since the early 1980s until now. Large-scale forest inventories are great source of data for scientists with the strength of being representative for a very broad range of environmental conditions, stand development, stand densities, forest types, silvicultural regimes and species compositions. As shown in the picture below, we used data from many plots dominated by these three species, growing whether in monospecific stands or in two- and three-species mixture stands.

We used a similar approach as in our previous study and examined individual-tree growth of Norway spruce, silver fir and European beech using non-linear mixed effect models developed in the context of the research programme Forests and Climate Change to assess tree growth. This time, however, we implemented distance-independent competition indices in the models. These indices were used as proxy for size-symmetric (competition for belowground resources) and size-asymmetric (competition for light) competition. To explore the influence of species mixture on tree growth, and thus to analyse the so-called size-symmetric and size-asymmetric mixing effects, we split these two indices into species-specific components. After a a process of model selection we obtained three final models that were used to evaluate the symmetry of competition (we skip the technical details here, but you can check the full paper if interested in statistical modelling).
Competition for aboveground or belowground resources? And what is the most competitive species?
First of all, we could show that species-specific competition indices could be integrated in individual tree growth models to express the different modes of competition among species in mixed forests. Although we are aware that since we did not measure tree roots our competition indices cannot be directly linked to root-to-root competition, we believe that our results were sound and that where highly representative for the three investigated species.
Essentially, we found clear differences between intra- and inter-specific competition. This means that there are mixing effects in two- and three-species mixtures of spruce, fir and beech. These effects, however, were different whether we consider competition for aboveground or belowground resources. In the case of Norway spruce and silver fir forests, our results showed that tree growth of both species is larger in spruce-fir mixtures than in the respective monocultures. Mixed forests 1: Monocultures 0! Our modelling results also showed that the positive competitive interactions between these two species might be due to a more efficient use of belowground rather than aboveground resources. This can be due to the different root systems of the species: shallow for spruce and deep rooting system for fir.
However, when we introduce beech together with spruce and fir we clearly detected negative effects of increasing proportions of beech on individual tree growth of both conifers. Is not a surprise that beech is a highly competitive species; our results indicated that the negative effects of beech on the growth of the two conifers could be due to competition of rooting systems and belowground use rather than for aboveground resources. We also found that, even if the growth of spruce and fir is reduced by the presence of beech, the growth of beech is highly improved by the presence of the two conifers rather than competing against individual of the same species. In simple words, beech is highly self-competitive but it grows better if mixed with spruce and fir instead of in monospecific stands. Mixed forests 2: Monocultures 0!
To better understand these effects, the figure below shows how different the growth of a single beech tree is (BAI is basal area increment) depending on the increasing number of competitors (in terms of basal area of trees larger than the target one, BAL) made of different species. The index BAL indicates competition for light, thus a battle crown-to-crown. You can notice that the lower line (the pink one) is the one where the little beech tree is surrounded by bigger beech trees. The lowest reduction in growth, instead, occurs when the little beech is surrounded by spruce trees or a combination of spruce and firs.

We discuss several of these aspects in the paper, including the use of competition indices in statistical modelling, and we refer to many other studies that have investigated these aspects. I think we covered the most important aspects in this post but feel free to download, read and share the paper. Eventually, our results demonstrate that it is possible to further understand the symmetry of competition alongside with species competitive interactions and forest inventory data are a great source of data for performing such analysis. Tree growth functions derived from such an approach could be integrated in forest scenario models fitted on nation-wide inventory data. My colleagues at WSL are currently working on the project SessFor: Ecosystem services in forests which will cover these aspects as well as quantifying ecosystem services from Swiss forests.
Improved modelling of competitive interactions can help to better evaluate adaptation measures for mixed forests under global change stressors. Although it has been widely demonstrated that planting and restoring forests using multiple tree species brings only advantages, in many parts of the world monospecific plantations are still the rule. I believe that it is certainly better a monospecific forest than a parking lot, but in the face of uncertainty such as changing climate and disturbance events, species mixtures and diversity can be our weapon to build resilient forests and mitigate climate change by stocking more carbon.
The full paper has been published in Journal of Vegetation Science: Mina M, del Rio M, Huber MO, Thürig E, Rohner B (2018) The symmetry of competitive interactions in mixed Norway spruce, silver fir and European beech forests. Journal of Vegetation Science, doi: 10.1111/jvs.12664
This post is based on a contribution that appeared in the blog Forest Monitor on July 16th, 2018.