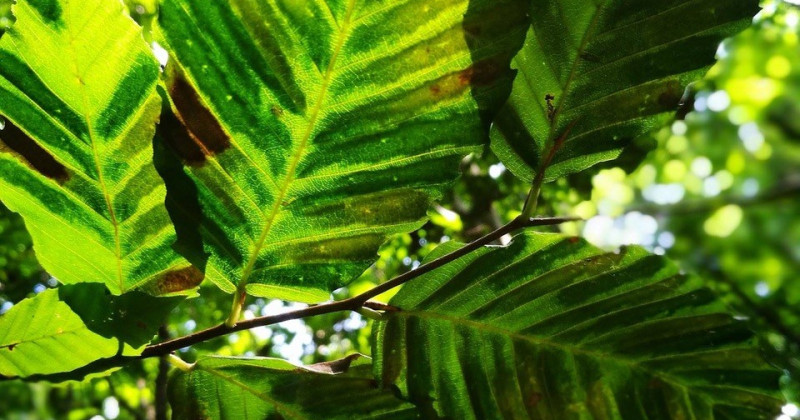 By: Carrie Ewing, PhD Student at The Ohio State University

We are always happy to have “guest-authors” who give us an insight into their work. Carrie Ewing, PhD Student at The Ohio State University, is currently researching tree genetics to determine the plant pathogen(s) that are causing beech leaf disease (BLD), a new and seemingly lethal disease affecting American beech trees (Fagus grandifolia).

The disease was first discovered in forests in the northeastern United States and parts of Canada. John Pogacnik, a biologist at Lake Metroparks in Ohio, first observed BLD in 2012 in northeast Ohio, U.S.A.  The disease has been spreading rapidly and has now affected forests in Ohio, Pennsylvania, New York State, and Ontario, Canada.

The initial symptoms of the disease manifest in the leaves as a dark, interveinal banding pattern on lower canopy foliage. The later symptoms are dark and crinkled leaves that are thickened or “leathery” in texture. Eventually, no new leaves are produced on a symptomatic branch, resulting in tree mortality in a few years as the disease progresses up through the tree’s canopy.

Along with tree mortality, there is a dramatic reduction in canopy composition within the forest due to the reduced size of the symptomatic leaves, which lead to a change in the understory composition and stand dynamics of the forest.

The causal agent of BLD is currently unknown but is suspected to be a pathogen due to the rate and pattern of disease spread and the resemblance to symptoms of other plant diseases caused by biotic agents (i.e. fungi, phytoplasmas, viruses, bacteria, or nematodes). For instance, the interveinal banding pattern observed on symptomatic beech leaves is similar to symptoms of viral plant diseases, including rose mosaic virus.  In addition, the rapid spread of BLD and the variety of environmental conditions where it is found make it highly unlikely to be caused by abiotic factors.

For my PhD program in the Bonello lab at The Ohio State University, I am developing a microbial profiling project to determine the pathogen(s) associated with BLD. The project essentially involves comparing microbes in symptomatic, asymptomatic, and naïve (i.e. outside of the area where the disease is known to occur) leaves of American beech trees. This project will allow us to determine which, if any, of the common plant pathogens are associated with BLD by using high-throughput sequencing methods.

In addition to our lab, other work is being done at the United States Department of Agriculture (USDA) focusing specifically on a recently discovered species of nematode (Litylenchus spp.) that has been found on some American beech leaves with symptoms of BLD. However, there is currently no proven causal relationship of this species of nematode to BLD.

Since we have not discovered yet the causal agent, there are no specific strategies currently available to manage the spread of the disease. We would appreciate to hear of any reports of symptoms of beech leaf disease in areas where it had not previously been recorded, so that we can continue to track its spread.