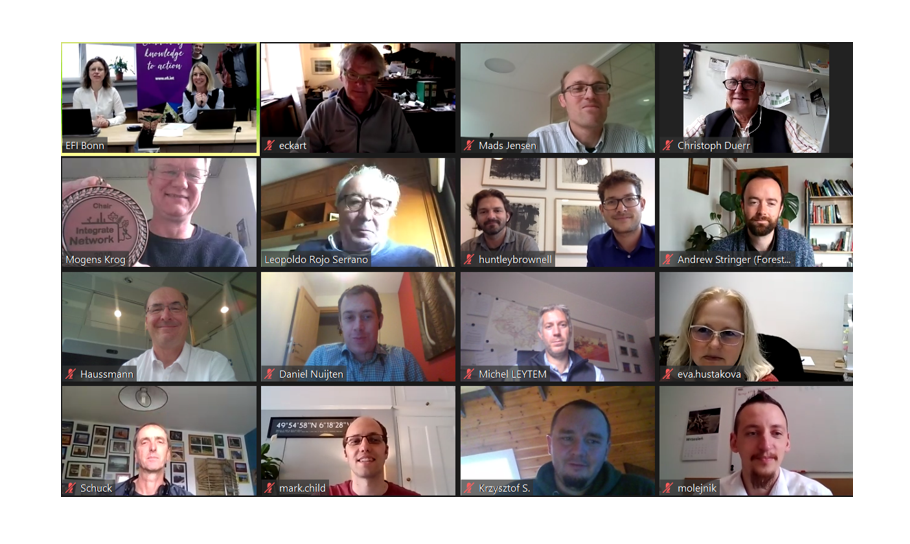 On the 28th of September, the European Network Integrate sought to progress the discussion of these highly debated questions during its sixth meeting titled: Multiple scales for nature conservation in sustainable forest management: Integration and segregation. The meeting wrapped up a series of two events organised by Denmark as Chair of the Network and took place as a webinar featuring two interactive sessions. The first was an open event that focused on discussions of how to integrate segregation in sustainable forest management and the tools, scales, and processes necessary for integration. The second meeting was a closed workshop with Network members to discuss upcoming publications, participate in the EU commission working group, and share reflections and future prospects.

The morning session opened with an interactive poll which prompted attendees to share their opinion on the best way to transfer a wood production forest into a non-intervention natural forest. Out of the three poll options, the vast majority of attendees indicated that ‘It depends on the situation’ with 68%, while 23% thought the best solution was to ‘Actively manage for ecological restoration to speed up the process’, and a small remaining 9% indicated they trusted a hands-off approach with their answer of ‘Do nothing. Nature will find its way in any case’. After the poll, an overview of segregation in sustainable forest management in the context of Denmark given by Mads Jensen (Danish Nature Agency) set the stage for a day of poignant presentations and fruitful discussions on the topic. First keynote speaker Erik Buchwald (Danish Nature Agency) focused on the importance of data on species and their ecology in the selection of sites for conservation, stressing that the diversity in biodiversity indicates that all species have their own conservation needs. Thus, we should avoid a one-size fits all approach to forest biodiversity conservation.

Second keynote speaker Kris Vandekerkhove (Belgium Research Institute for Nature and Forest) appealed to those who suggested in the poll ‘do nothing’ was the best approach for transition with an example of challenges, but ultimate success, of forest development after 20-30 years of non-intervention. He also referred to public opinion which tends to like wilderness. Kris combined his presentation with the presentation of keynote speaker Yoan Paillet (National Research Institute of Science and Technology for Environment and Agriculture, France) who could not attend. His presentation focused on the issue of the lack of primary forests in Europe as a primary roadblock for successful forest biodiversity conservation. Furthermore, it provided a relevant example of how managed forests could act as a surrogate for primary forest conservation. Keynote speaker Jacob Heilmann-Clausen (University of Copenhagen, Denmark) then appealed to those who voted for active management in the poll with his presentation on how active vandalism can promote diversity in the forest structure and associated biodiversity in managed forests and recent forest reserves.

The presentations proved to be stimulating for discussion, and attendees and Network members alike engaged in discussing key questions such as how to handle non-native species, ways to approach the changing roles of scientists from strictly science related to more lobbying oriented, and how to address the trade-offs between environmental and socio-economic values of forests. The thought-provoking presentations and discussion also convinced some participants that initially voted for either ‘active management’ or ‘do nothing’ to switch their answers when the poll was given for a second time, resulting in 79% voting for ‘it depends on the situation’.

The afternoon workshop with Network members provided an opportunity for giving useful feedback on  different upcoming publications – from scientific papers to Network-related publications – and a way forward for the future of the European Network Integrate. Agata Konczal (EFI), Bo Larsen (Professor emeritus, Department of Geosciences and Natural Resource Management, University of Copenhagen) as well as Georg Winkel (EFI) opened up the session with a presentation of a draft report on integrating conservation and people in managed forests in 12 European countries, encouraging members to provide feedback if their country is featured in the report. The report is discussed in a paper developed as part of the Danish Chairmanship by the group of the co-authors under the lead of the Integrate Secretariat and Bo Larsen as well as Anna Lawrence (University of Highlands and Islands, Scotland). The research had two main objectives: (1) assess the link between participation in forest policy making and forest management planning, and (2) assess the integration of biodiversity conservation in forest management. In regards to participation, the study found that it is institutionalised differently across the 12 countries, but is generally seen as having a direct positive relationship with learning among different groups, and can be beneficial for biodiversity. Results of the second objective were equally interesting, suggesting that there is an increasing focus on biodiversity conservation in forest management in the 12 countries, which in several also coincided with increasing management intensities.

Georg Winkel then provided an outlook for a way forward with a presentation of a draft document on joining forces in advancing integrated forest management in Europe and provided several conclusions such as the need for an effective forest policy framework and the involvement of the public and Europe’s forest owners. Following Georg’s presentation, a lively discussion developed where Network members provided useful feedback and comments on the two drafts. In particular, there was considerable feedback for the draft report on integrating conservation and people in managed forests, with some members disagreeing with the how their country was placed in regards to favouring segregation or integration conservation strategies. Such feedback was widely encouraged by the speakers, as it helps them to develop a more accurate report of the countries.

Members were then eager to hear from Daniel Nuijten (DG Environment) who gave a presentation on DG Environmental Working Group ‘Forest and Nature’ which addressed the crucial need for a working definition of old-growth forest on a European level. After national definitions have been collected, and trade-offs between what is realistic and what will feed into policy have been discussed, the working group anticipates to have a working definition by next year. In the following discussion,Daniel emphasised the potential role of the Network in the creation of a definition, explaining that useful feedback benefits the working group and overall feeds into deliverables.

As the Network is always intrigued to learn more about the expansion and development of the Marteloscope network, members were keen to hear Andrew Stratton and Prescott Brownell’s (University of Copenhagen, Denmark) presentation on the new Danish Marteloscopes. By using carbon as an additional third element, the research provided evidence of how forests should be managed for climate benefit, suggesting that thinning could be beneficial in the long term. The exciting results show the potential for using carbon alongside other measurements with the Marteloscopes. A key discussion point following the presentation focused on the potential projection of the research into the future. Andrew and Prescott agreed that this is an important consideration for future research, but suggested it may prove to be challenging when tailoring to specific countries.

A productive afternoon of presentations was then wrapped up by Mads Jensen and Mogens Krog (Danish Environmental Protection Agency) who together shared a draft document for national focal points and chairmen of the Network, which was met with strong support. After another round of effective and useful discussions and comments, the workshop celebrated and reflected on a year and a half of success and ultimately very important work lead by chair Denmark on the issue of biodiversity conservation in sustainable forest management and passed over the chairmanship to a very enthusiastic and excited Switzerland. Finally, Spain was announced as the 2021 Chair to continue the valued work on the topic in the future.

Featured image: European Network Integrate members pose for photo after wrapping up the second half of the webinar. Photo by EFI.