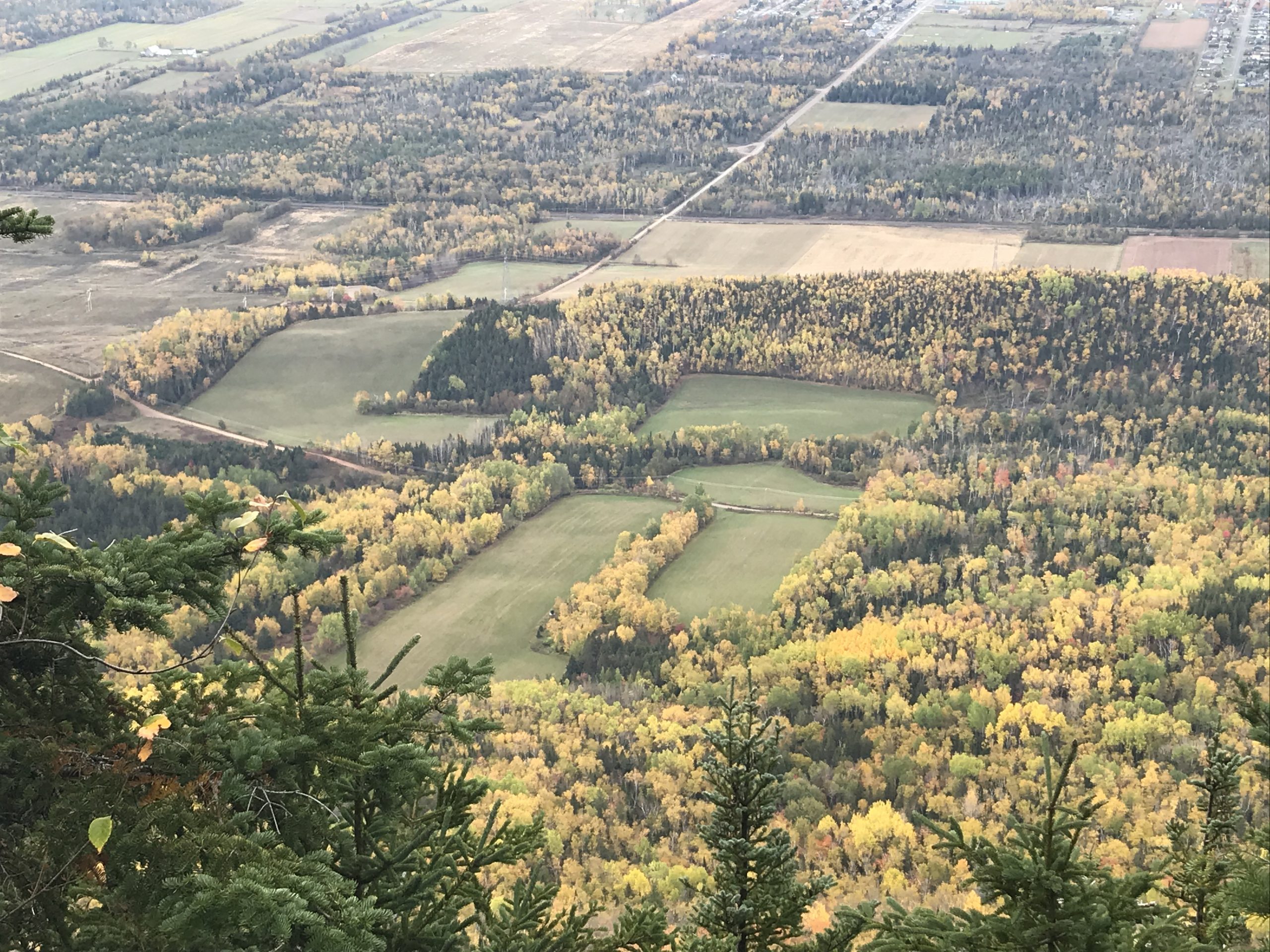 Some time ago we discussed how viewing and analyzing forest landscapes as functional complex networks could be a promising approach to increase ecological resilience to global uncertainty. Now, two new studies show how this could be applied in differently structured landscapes.

Our blue marble planet is one single interconnected organism. From plants to pollinators, preys to predators, climate to primary production, Earth’s natural ecosystems have evolved for million years to build complex and balanced interactions. Forest landscapes are also complex ecological networks, which can be depicted in many ways depending on the scale of observation. For example, if we take a look at a satellite image of a rural area (e.g., an administrative region in Germany or in southern Canada), we will immediately recognize patches of forests fragmented by agricultural crops, roads, powerlines or human settlements. In other areas, forest might cover a larger proportion of the land, resulting in a more continuous matrix. In both cases, a series of interconnected relation exists among tree species, stands, and forest patches allowing the maintenance of vital functions of such ecological system.

Global change is a cause of great uncertainty on the functioning of forest ecosystems. Impacts of changing climate, societal demands and natural disturbance regimes have the ability to disrupt such connections causing abrupt changes in structure, composition, and function of forest ecosystems, with consequent decline of vital ecosystem goods and services which our society highly rely on. To make our forests more resilient, we need to maximize their self-reorganization and responding capacities as well as diversify their functions, so that our landscapes would be more ready to cope with future disturbances. Certainly, small-scale interventions matter, but given the fact that actions in one place can influence the fate in another due to the interconnectedness nature of ecosystems, coordinated management regimes at much larger scales than the typical forest stand are key. Thus, analyzing and planning management at the landscape level, considering forest ecosystems as functional complex networks could maximize the efficacy of silvicultural practices. But how to apply such concept in real forest landscapes?

The first thing that forest managers should do to operationalize the functional network approach is to characterize the functional diversity of the tree communities present in their forests. This is achieved by moving beyond the concept of tree species and thinking of tree communities as assemblages of functional traits. Functional traits are biological characteristics influencing species performance in terms of growth, survival, or reproduction. It is well established that a tree community composed of species with a high mixture of traits is known to better respond and recover from disturbances and environmental change. Such traits are for example drought, shade, and waterlogging tolerance, but also seed mass, resprouting ability, wood density, etc. In a second step, it is possible to represent our forest as a network and then assess the functional connectivity between forest stands. While structural connectivity defines the part of the landscape that is actually connected (for example through the physical arrangement of corridors/patches), functional connectivity can be defined as the potential for seed and traits to disperse among forest stands. That is, the exchange of organic and genetic material contributing to the distribution of functional traits across the landscape. A landscape with high functional connectivity likely increases the flow of functional diversity among communities, improving the ability of the ecosystem to self-organize, recover from disturbances, and adapt to new conditions. Third, tree species can be associated to indices expressing their vulnerability to the most expected natural disturbances that might affect our landscape in the future (e.g., insect outbreaks, fire). By mapping the vulnerability of forest stands to natural disturbances across the landscape, it is possible to visualize and rank the most critical stands requiring priority interventions to increase their resistance and resilience, for example by increasing the share of species with rare traits to give a boost in functional diversity.

An example of such analysis is presented in a recent paper in Forest Ecology and Management. Nuria Aquilué and colleagues from the University of Quebec and the eco2urb consulting company analyzed the Haliburton Forest, a privately-owned large forest in south-eastern Ontario, Canada, covering more than 34,000 ha of temperate mixed woodlands. We analyzed this forested landscape, with a rather high forest cover, not only in terms of species richness and abundance but also according to functional diversity and connectivity. This way, the forest stands subdivided into different management areas could be depicted as functional networks (see figure above). In addition, forest stands were mapped according to their vulnerability to potential natural disturbances. We found that despite being composed of many tree species, Haliburton forest is not very functionally diverse. This makes the landscape particularly prone to structural and functional shifts due to natural disturbances or sudden environmental changes. We showed how management interventions such as strategic harvesting and planting, targeting the most vulnerable stands could increase both functional diversity and connectivity. The method presented in this study does not require complex simulation models or complicated analysis, so it can be easily applied by local forest managers to evaluate forestry interventions based on principles of the functional network approach. Practitioners may benefit from applying this approach on their forests to explicitly identify functionally poor tree communities, highly or very-highly vulnerable areas, and tree species to be planted or encouraged through natural regeneration that will strongly contribute to forest adaptability. Although very practical and easily applicable by foresters, this was a static analysis where the temporal dynamics of the ecological process driving succession in forest landscapes were not considered in their whole complexity. Not yet.

Because of the high uncertainty related to global change, dynamic simulation models are extremely valuable for evaluating future scenarios. Many forest simulation models have been developed in the past years, each one operating at different spatial scale and modelling ecological processes at various degrees of accuracy. Many of them have been already applied to support management decisions and evaluate silvicultural adaptions to climate change. Thanks to the advancing computing power and the increasing availability of inventory and remote sensing data, the use of spatially interactive forest landscape models has grown considerably in the past years. These models simulate the processed driving the dynamics of forest stands (how trees establish, grow, and die) in a spatially explicit framework, so it is possible to forecast forest futures in landscapes up to thousands of hectares. Many of them are climate-sensitive too, meaning that drivers of forest growth and dynamics respond to changes in environmental conditions such as increasing temperatures, CO2 and changing precipitations regimes. So, why not combining the advantage of spatially interactive forest landscape models with the principle of the functional network approach to assess future forest resilience?

This is what we have been doing in the past months using a large, fragmented forest landscape in southern Quebec as a case study region (see figure here above). Results of this study are reported in an article recently published in Ecological Applications. In this paper we used the forest landscape model LANDIS-II to simulate future forest development, including the effect of climate change, current management (harvesting and planting), and natural disturbances until the end of the 21st century. Model outputs (e.g., changes in biomass, productivity, species abundance, forest types) were used to represent the landscape as a functional network, in which forest patches are symbolized as nodes with changing functional diversity and linked one another with different and variable degrees of functional connectivity (see figure below).

Since climate projections for the region predict mostly increases in both temperature and precipitations, our results indicated that that climate change will likely promote forest productivity and favor warm-adapted deciduous species (i.e., hardwoods) at the expense of boreal conifers. Conifers seems also be more vulnerable to natural disturbance factors in the future. We also found climate change having a negative impact on resilience indicators such as functional diversity and connectivity, both at the landscape and management area level (see figure below). Current management practices were found to be not effective enough to maintain resilience in the long term. However, in this study we simulated management in terms of harvesting and planting as it has been carried out during the last few decades and we did not include potential adaptations to management strategies that foresters in these regions are starting to apply. For the perspective of viewing and managing the landscape as a functional network, we detected different patterns depending on the scale of observations (e.g., general trends at landscape scale but more variable at management area and local scales). This highlights the need for a multi-scale perspective when evaluating future scenarios in fragmented forest landscapes, and the feasibility of designing coordinated management plans to strategically enhance resilience.

Future steps: Model network-based management and test the approach in the field

The next natural step is therefore to design management strategies according to the functional network’s principles and to verify their potential implementation in representative landscapes. This can be done first by using simulation models, comparing scenarios in multiple landscapes having different initial functional diversity and different degrees of fragmentation. For example, in very fragmented forest regions it would be key to assess the influence of adding new tree plantations positioned in strategic portions of the landscape to boost functional connectivity. In denser forested landscape, instead, major focus could be placed on the functional diversification of existing forest stands, for example by promoting rare traits with specific silvicultural interventions and by enrichment planting following harvesting.

The functional network approach is now being given serious consideration by some large forest compagnies and provincial governments in Canada as a way to move forestry away from mainly a resource extracting practice to that of contributing to the improvement of the overall landscape resilience. Pilot projects are currently being considered in several forest biomes of Canada affected by different types and levels of disturbances. We hope that these novel approaches will soon contribute to rehabilitate forestry in the eyes of the public, balancing our need to cut trees for economic and social purposes with the necessity to help the forest to adapt to global changes.