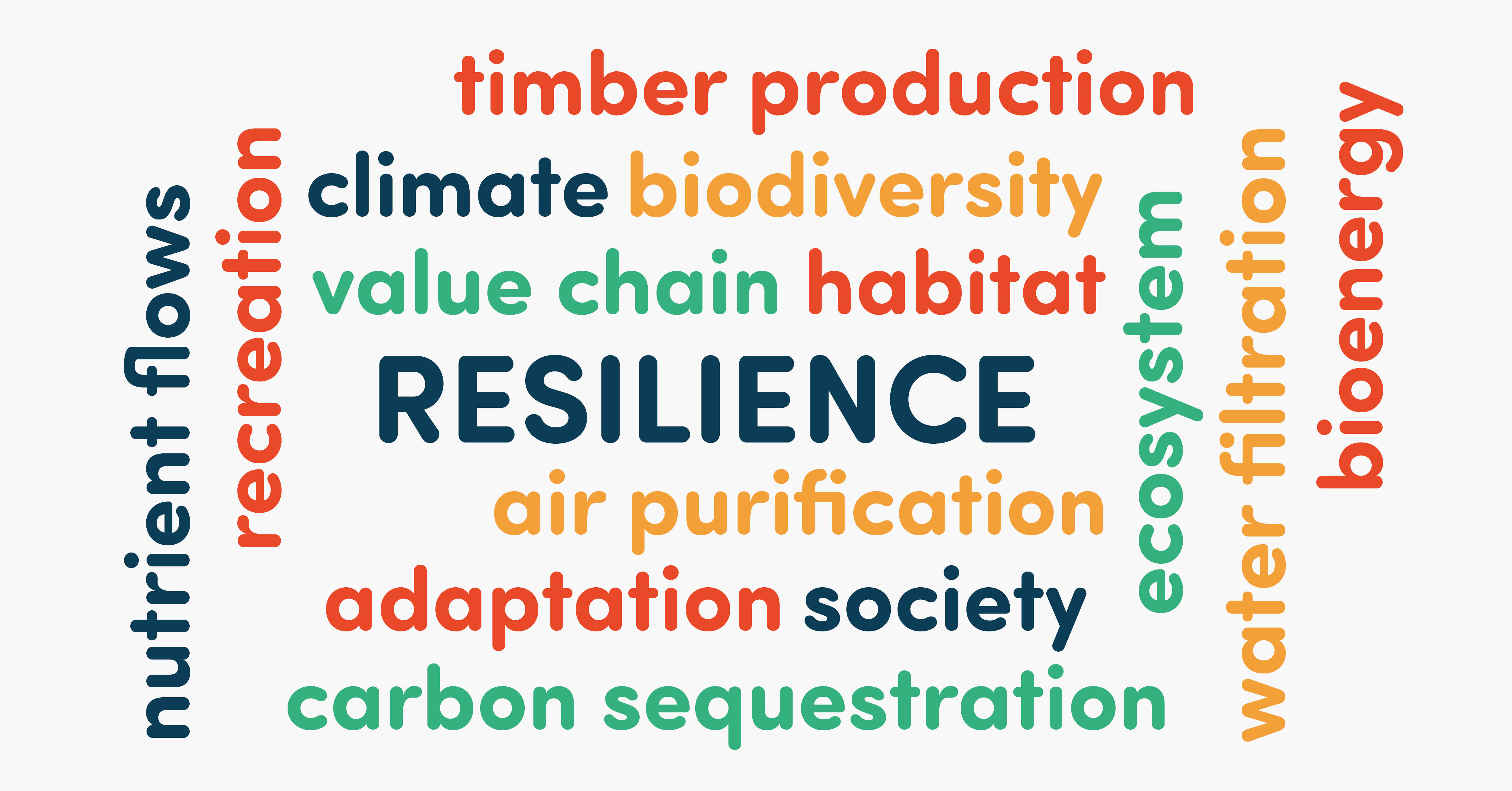 In recent weeks, the RESONATE project’s Twitter has explored different definitions for forest resilience. Some of them sounded rather similar, some very different and all of them might have left the reader with more questions: “But what does this mean in practice?”. Armed with coffee and cookies, I’ll try to enlighten the mysterious and sometimes headache-inducing world of resilience.

To make some sense of the different definitions, it is good to remember that they are rarely completely new and innovative but are based on some previous definitions from which they have been further developed. That is why some of them sound very similar but with some notable differences.

What are the different definitions?

Let’s start with one of the “original” definitions of resilience that many use still today and that is certainly the base for many of the recent definitions: “Forest resilience is the capacity of forests to absorb change and disturbance and still maintain the same relationships between populations and state variables”, by Holling in 1973. C.S. Holling is considered to be one of the founding fathers of the current resilience science. The focus here is on the ecosystem. The definition is open for some interpretation: some may say that absorbing disturbances is equal to resisting disturbance, e.g. a storm would not make the majority of trees to fall. Others may say that absorbing means that the forest can suffer from a disturbance, but it would recover itself with time back to its pre-disturbance state. With our storm example, this would mean that the trees do fall but with time a new generation of trees grows, and the forest is maintained. The second part of the definition mentioning relationships between populations and state variables does restrict the definition to consider the current species and functions in the forests, as if one species disappears, the relationships between populations do change. Therefore, according to this definition, if a monoculture is converted to a mixed forest, the monoculture is not considered resilient. However, the newly converted mixed forest might be! So, does that mean that the forest as a whole is resilient?

According to the definition by Scheffer (2009), yes. In his words: “Forest resilience is the ability of a forest to absorb disturbances and re-organize under change to maintain similar functioning and structure”. Notice how from relationships between populations and state variables we are now encouraged to look at functioning and structure of forests. This mean that even if all the species have changed but the forest still sequesters carbon, provides habitat, and filters water, the forest is resilient. The main change from the 1970s is the unfortunate reality that human actions have changed the environment (climate, nutrient flows, ground water use) to the extent that some tree species may not survive in their current location.  And if we wish to stop a forest ecosystem from changing to a grassland for example, we might need to change the tree species. This is currently the case in many Central European regions where Norway spruce forests are suffering from drought and pests. If we wish to maintain forests in those areas, adding more tree species to those forests is in order.

So far, we have only considered the forest ecosystem. But in most cases (at least in Europe), forests are managed for different purposes: timber production, recreation, bioenergy etc. Society also benefits from many other ecosystem services, such as carbon sequestration, air purification and avalanche protection. Due to these multiple interactions between humans and forest ecosystems, many scientists argue that it is not enough to look at only forest ecosystems, but also at the society benefiting and influencing them: forests are social-ecological systems where the ecosystem and society are interlinked on many scales.

In general, definitions considering forests to be social-ecological systems tend to be very broad as they aim to capture the full complexity of forests and society. Furthermore, they want to capture the uncertainty surrounding what will happen in the future and that we should somehow prepare for it. Biggs et al. (2015) defined forest resilience as “the capacity of a social-ecological system to sustain human well-being in the face of change, both by buffering shocks but also through adapting or transforming in response to change”. Such a level of complexity becomes difficult to understand, so let’s consider an example: Forest resilience according to this definition could be a forest-dependent society that is transitioning from a fossil-based economy to a renewable one in ecologically, economically, and socially sustainable manner. The role of forests for our societal well-being certainly became more evident with the COVID-pandemic when in many countries the only possible activity to do outside your home has been to go for a walk in the surrounding nature.

Isn’t that too much?

“Ah but that social-ecological thingy is way too complex, no one is going to use that!” you may think now. And you are certainly not alone. Some scientists do argue that the complex definitions of resilience make the whole concept useless to apply in a forest management context as it is simply too difficult and beyond the scope of forest managers. They would more likely argue to use definitions of forest resilience that are easy to measure, as is the one by Pimm (1984). He defined forest resilience as the time it takes for forests to recover its pre-disturbance state. In forest management, if a forest quickly regenerates many seedlings and well-growing young trees, we can say it is resilient. Clean and simple.

But. With the changing climate, degrading ecosystems, and economic shocks there might not be anymore the state we would like to go back to. Some areas might have become so dry that tree regeneration is seriously hindered or even no longer possible. Some industries might have diminished, and that has changed the demand for wood products. Consequently, we may have to bring back the human into the picture to introduce more drought tolerant tree species or genotypes through assisted migration, as otherwise the next generation of forests may no longer sustain a comparable portfolio of ecosystem services.

Which one should I choose then?

It depends on what you want to do with the definition. There are no right or wrong definitions, but some are more suited for certain purposes than others. For example, many scientists are currently studying how resilient different tree species are to drought. They compare the growth of the trees in very dry years with normal ones, and if the trees are able to recover the growth rate they had before drought, they are considered resilient. In these situations, the simple definition from Pimm is very applicable, as there is a specific event (a drought) that affects a specific, rather simple system (a tree).

Now, if we would look at resilience of a forest in 50 years, the situation is different. As there is no certain event from which to recover from, the definition by Pimm seems unapplicable. Instead, we should look at the broader definitions. It’s good to also remember that some of the definitions have never been meant to be measured but they are more suited for understanding our forests, how they are linked with society and what might be the most vulnerable parts. We could perhaps use the definitions by Holling and Scheffer if we are studying for example the resilience of very remote, unmanaged forest areas to climate change. Then we could model future disturbance regimes, tree mortality rates and species dispersals to understand how the forests would look like in the future. However, in the age of the Anthropocene, even the remote, unmanaged areas are influenced by humans, and managed areas are indeed the resource reserves of the society. Forest management is influenced by climate change, the demand of different tree species and other ecosystem services which in turn are affected by policies, consumption habits and many other phenomena outside the forest ecosystem. Therefore, we cannot focus only on the ecosystem resilience, we need to also look at the society and use the social-ecological resilience concept.

Sounds complicated? That it is. But so are the problems we are facing: climate change, biodiversity loss, global economic shocks… We need multiple tools to address them and that is what the different definitions can provide us with.