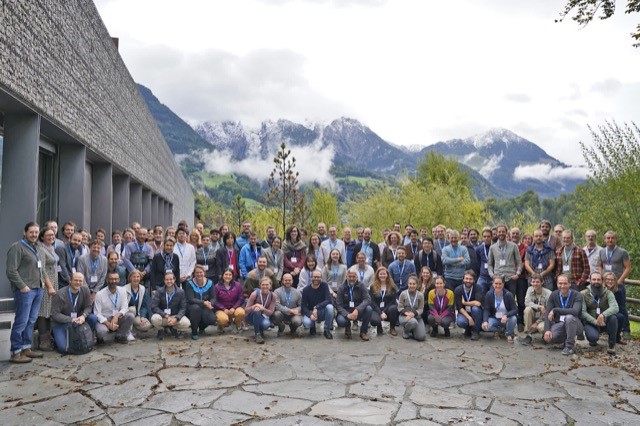 Imagine you are sitting in a room full of people for three days. Listening to a lot of presentations which do not necessarily light up your interests. You make the effort to resist the temptation of checking your mailbox. Feeling guilty for seeing work accumulating, knowing you will have to address part of it at night, alone in your hotel room. Eventually, you will be presenting your work and – if you are lucky – have an awesome 20 minutes of lit discussion and feedback. But after that, you will rely on coffee again to fight back the gravity attacking your eyelids, especially in the post-lunch sessions. You will be looking forward for the drinks at the end of the day to socialize a bit and get to know people.

A (much needed) alternative

Well, the latest conference I attended was absolutely nothing of the above.

In late September, I presented part of my work at the “Forest Disturbances and Ecosystem Dynamics in a Changing World” symposium, organized by the Ecosystem Dynamics and Forest Management (EDFM) group of the Technical University of Munich, led by Professor Rupert Seidl. The symposium, held in Berchtesgaden and surrounded by the magnificent scenario of the German Alps, aimed at addressing the theme of forest disturbances and consequent ecological pathways from 4 different angles:

Due to the pandemic restrictions of the last years, the event was postponed for three times since 2019. However, the lack of scientific interactions certainly inspired Professor Seidl and his team, who proposed a very innovative format.

In fact, they designed an event that was anything but a conventional conference and was tailor-made for boosting people’s interactions and scientific discussions. The (very international) crowd gathered for the symposium was consisting of around 100 researchers from 4 continents: only people who were selected to present their work, in a very equal share of both experienced and younger scientists. This decision definitely contributed to condense expertise and research interests around the symposium topic. The structure of the event was based on the 4 focal topics mentioned above, which were defining 4 different sessions. Each session was opened by two key-note speakers, some of the most prominent scientists in the field. I have to admit, that I have rarely been so inspired by scientific speeches: they were dynamic and engaging and demonstrated how an inviting communication style can support the content presentation. After the session’s keynotes, each of the participants had a minute to pitch their work. I have personally been very challenged by selling my work in one minute. It is not easy to catch the interest a crowd of expert in 60 seconds. This has been a very interesting lesson for me, a bit of a fire baptism! After this orientating introduction, each session’s participant had to hang a poster of their work and stand in front of it while the rest of the crowd would roam around, ask questions, engage in discussions and debate the results of all the exposed works. It was at the same time exciting and intense to have so many challenging reflections together with so many knowledgeable people. In the evenings I felt like after spending a full day on the beach, completely exhausted but happy, not because of the sun-light but because of the conversations and the thinking I engaged in.

Talking through the landscape

Halfway the symposium we had a whole day field trip in Berchtesgaden National Park. It was awesome!

Crowned by the white peaks of the western Alps, the park covers the whole altitudinal gradient of forest ecosystem in central Europe, going from the upper timber line to sub-montane broadleaves forests, and this it is exactly the space we covered. We reached the alpine pastures on mountain tops using a cabin-line, having a paramount view over the valleys of the park. From there we started to walk down, and of course we talked about trees!! We discussed upper timber line dynamics, traditional land uses, species ecologies, and ecosystem’s trajectories after nature protection. We elaborated on disturbance impact on forest ecosystems, post-disturbance management strategies and the effect of climate change while walking back to the valley bottom. It was very inspiring to talk about what we could see just in front of our own eyes with so many great scientists, while being surrounded by breath-taking landscapes. If I should have look for a title of this hike, I would have chosen: “Ecosystem dynamics – talking the landscape through”.

Summarizing, I think the organizers reached their aim to make up of the last years’ segregation, prompting discussion and interaction. Honestly, it felt very enriching. But of course, nothing is perfect 100% and I think there is still room to improve this conference format. The main thing that I was sad about is the fact that I did not have space to interact with all the people that presented their work in parallel to me. This was a pity especially because, since the posters were divided in topics, I missed the posters more closely related to my work. Clearly there is a trade-off between interaction and presentation, as always in conferences. I have been reflecting upon how this could be addressed, and it is quite difficult to find a solution. Maybe inviting two people per poster (possibly a senior and a junior) could be an answer? This way it could be possible to have a turn-over in front of the poster and explore the other hanging works. Is this feasible as suggestion? I will leave the judgement to future organizers. What I instead embrace as personal judgement is: this conference format was great! It really sparkled up the interactions and definitely gave participants the chance to have discussion with much more people.

This alternative format made me ask myself: why do we need an alternative type of scientific interaction? Eventually, I ended up reflecting on the transformations that in general affected society in the last decades, and the meaning of inclusivity in the transversal application of science. With climatic changes, biodiversity decline, wracked food systems, energy crisis and so on we are facing very complex problems, which often require multidisciplinary and out-of-the-box, innovative approaches. Multidisciplinary and innovation are challenges though, because different disciplines – and different schools of the same discipline – speak different languages. However, without bringing those different languages together and stimulate collective action we won’t be able to face those systemic failures. As the system is failing us, we need to seek different ways to look at those entangled problems – and to change our perspective, we must be able to embrace different visions, diversity, and innovations. Finally, calibration to changes is crucial. Our world is changing so fast that if we focus too much on a problem, we might miss the systemic changes around it, which may eventually change the problem itself. To keep the pace, it is very important to listen to people who start looking at the problem from a different angle and in a different moment in time – therefore, with a different perspective of it. Especially young scientists can play a very important role in this sense, thanks to their un-biased and “brave foolishness” of looking at things. That is why inter-generational communication is crucial in science (as well as in society). However, it is not always easy for a young scientist to have a safe space to talk and be heard.

And here it comes my point. Few years ago, as a MSc student, I attended a scientific conference on ecosystem restoration. The conference was held in a traditional format, similar to what I described at the beginning of this text. Few experts talked about a topic in a big room full of other experts. After a speech, I had a question which was quite simple, but would enquire the speech in a fundamental way. I wanted to raise my hand, but as I had very limited experience, I felt uncomfortable and insecure about my question. What if was a stupid question? What if those people who know a lot would start laughing at me? What if I get child-xplained? All those questions started popping up in my head, and I ended up staying quiet and sinking in my chair. I was not confident enough to talk. It is not easy for young scientist to speak up. Science still has quite a nepotist and pyramidal structure. For a junior it is difficult to approach a senior on the same level. However, often young scientists have fresh ideas, unbiased perspectives and very valuable and relevant opinions which could enrich a lot the discussion.

The type of interactions I had during the conference in Berchtesgaden felt good. It was much easier and intimate to talk to an expert face-to-face and place myself on the same level of the conversation. I did not feel insecure expressing my opinions. I did not feel the pressure of hundreds of eyes on my back. Those things might sound foolish, but very often limit young scientists’ confidence of discussion. Moreover, I think this format also created a safe space for a senior to critically listen, without urging answers nor show off. In my opinion, this kind of frameworks allows a much easier and healthier scientific interaction, especially for youngsters, which luckily were well represented in the Berchtesgaden crowd.

All images in this blogpost were provided by the author Marco Patacca who thanks Gert-Jan Nabuurs, the VBL group of Wageningen Environmental Research, the PE&RC graduate school and Lister Buildings for funding his attendance to the conference.